You’re undoubtedly familiar with Chicago’s own Red Scare Industries if you’ve enjoyed a slice of what the midwest has to offer punk-wise. The label, now 15 years in the business, has been hosted bands like The Menzingers and Teenage Bottlerocket over the past 15 years—this year’s festival alone included Red Scare comrades Masked Intruder, Sincere Engineer, and Ramona just to name a few.

5 years ago, label founder/operator Toby Jeg did a track by track walkthrough of 10 Years of Your Dumb Bullshit, Red Scare’s 10 year anniversary comp. Today, we’re happy to report that Red Scare a) still exists 15 years in, b) still kicks major ass, and c) Toby is here to walk us through each track of the label’s 15th anniversary comp, 15 Years of Tears and Beers.

In reviewing the tracks, Jeg notes that the lineup of bands is more diverse than the last comp. “The overall punk community is more diverse and inclusive than it was a few years ago,” he adds. “On the flipside—and I truly think this is purely coincidental—there’s a real ‘heartbreak’ vibe that pervades these songs.” Give the comp a listen, and please enjoy all the tales told below:

The Copyrights – “Maine or Oregon”:
TOBY JEG: The Copys are awesome and there’s a reason they’re first on this record. Best band EVER from Carbondale, IL. This track has both Fletcher and Brett hollerin’ on vocals, which will remind some of their old side project, Dear Landlord. In other news, I told them they should call the song, “Maine or Oregon (Don’t Look Back)”, and they told me to scram. Unfortunately, we have to “respect the artist” *eyeroll*, but I think my version is better. For real though: this is the best 51 seconds of music you will hear in 2019.

Sincere Engineer – “Dragged Across the Finish Line”:
This is the first song Sincere Engineer recorded as a band since, like, becoming a proper four-piece unit. It’s a sensible debut outing for the new quartet too: it sounds like it could be on the debut LP, but it also shows flashes of progress. After one release, they’re already getting better at this shit. My favorite thing about Sincere Engineer is that they appeal to the Nü Emo crowd, but they’re secretly a gritty punk band. Don’t tell the emo kids though, they’ll get their tie-dye and high-waisted jorts all tangled up in a wad.

Broadway Calls – “Sunday Morning”:
The first cover on the album! We started talking to Broadway Calls when they sent over their new demos, and we made quick moves to get them on this comp. Strangely, many people don’t know this is a cover of The Menzingers. The two bands toured together back in the day, and this was a fun way to revisit that. We know the ‘Zingers are ashamed of having to do a stint down here in the trenches of Red Scare, so we like to remind them as often as we can!

Sam Russo – “The Window”:
As the label guy, I’m not supposed to have any favorites, but to hell with it. I mean, why even read this stuff if I’m not gonna spill some tea?! So this is probably my favorite track on the comp. First time I heard this song was at a show last year in London. I was watching Sam play and I tripped and crashed on my ass (I think the floor attacked me) while I was holding TWO cocktails. Witnesses can attest that I didn’t spill a drop.  More importantly, he has a new record coming in early 2020 and it’s gonna be incredible.

Elway – “High Drama, Low Comedy”:
We’ve done four full lengths with Colorado’s Elway, so they’re essential for this collection. Elway usually does two things thematically: funny, or sad/heavy. On this song they kinda do both. The first time I heard the Queen part (and YES, it’s totally Queen) I laughed aloud. It’s pretty dope. Fun fact about this tune: Elway’s drummer broke his leg days before they were set to record, so singer Tim stepped in to “hit the skins,” if you will.  Not bad, Tim!

The Bombpops – “East and West”:
I don’t come up with many good ideas. BUT… asking The Bombpops to cover Enemy You for this comp was a good idea. David Jones from EY was great at crafting melody, and The Bombpops are great at executing melody. The song came out WAY better than I ever imagined, so massive props to the ‘Pops for overachieving on this cover. David passed away in 2015, and this is an excellent tribute to his words and music. We miss ya, Jonesy.

Garrett Dale – “Dead Body”:
GD is the singer for Oklahoma City’s Red City Radio, and a few years ago he started fucking around and playing impromptu solo shows. It’s super fun stuff, and the guy can play just about any song by request. Between the Garth Brooks and Rancid covers, he would bust out an occasional Garrett original. “Dead Body” is one of those and we basically conned him into recording it for the comp. [Laughs] Feels like we caught a very rare snipe, ya know?  Just wait ‘til you hear “Gravity Bong.”

Tightwire – “AYL”:
Being that Red Scare is the undisputed champ of Midwest punk, we needed a band from Minneapolis, and thankfully we found newcomers, Tightwire. They put out their debut last year and have already toured with a buncha good bands. If you like Midwest punk (you do) and you like Red Scare (YOU DO), you will love Tightwire’s 2018 debut LP. Like that album, this song was self-recorded, cuz they’re super p0nx. As for all that bullshit about “Minnesota Nice”? Completely true.

Brendan Kelly and the Wandering Birds – “All I Hear Is Static”:
So this is a real hot track, gang. Controversial! ¡Escándalo! It’s a cover of The Lillingtons, and the Ramones-core punks do NOT know what to make of it, haha. For this outing, the Birds are Brendan, Dan Tinkler, and Derek Grant. Derek stepped away from music for a bit and came back with a vengeance to make the synth-y music bed on this tune. I love how it came out and it reminds me of something off the Drive soundtrack.

Ramona – “Yeah Again”:
This song came from their Deals, Deals, Deals! session. Funny story… here’s the scene: $1 Taco Night in West Philly. I’m sitting there with Ramona and tacos and big margaritas and we’re talking about this compilation. It was in the early stages of planning and we all (mostly Abby) tentatively named the comp, Now That’s What I Call Red Scare! Pretty good, right?! Anyhow, I also asked them to bust out one more song for us, and thankfully they did. Josh [Rubin] from Sicko said this was the best song on here. High praise!

MakeWar – “TJ”:
This song details MakeWar’s account (I remember it differently, ha) of getting signed to Red Scare. The lyrics, “Liar, liar!” refer to their own bluff about how they had other interested labels on deck: “We’ll go somewhere else…” Well played. Their new record (out November 1) will be released on Fat and I’m told they got their foot in the door because they wrote a song about someone at the label. Well played, again. Look out Mr. Brett, you’re next!

The Brokedowns – “Thinking With The Lights On”:
I love how this track explodes right outta the gate, and that’s thanks to Mustafa, Chicago’s Blunt Wrap King™.  It’s a cover of The Copyrights, which makes them the only band to (sorta) be represented twice on here. Never enough Copyrights. Words to live by. Originally The Brokedowns were going to cover “Shit’s Fucked”, but they opted for this one, which is a whole 3 seconds longer. The funniest band on Red Scare?  Definitely The Brokedowns. I think by law I’m supposed to mention LSD, weed, Sherm, Jenkem, poppers, Molly, and PCP anytime I write anything about this band. Just wanna make sure we stay on brand and check that box.

Sundowner – “Bleed Together”:
Pretty slick move for us to convince Sundowner to contribute a track to this compilation.  First new song in 6 years!  We put out SunD’s debut album back in 2007, so it was cool to bring him back to celebrate the label’s 15-year milestone. Singer Chris flew down to L.A. for a weekend to link up with Neil to bang this out in a weekend.  Rumor has it there’s another song from this recording session. Hmmm…

The Lippies – “Acid Head”: Here’s the first new one from The Lippies since they broke up and reformed. They have another record in the works, and this is a promising sign. A lot of people really like this song, and here it is buried near the end of the comp because I’m a jerk. Look folks, when you have a buncha good songs, some hits just get pushed to the back. That’s a little record label secret for ya: good records have good songs on Side B. At the time The Lippies broke up, they actually had an offer to play that big ol’ Riot Fest. Can we, uhhh, revisit that in 2020, please?! It’s called a rain check, guys!

Billy Liar – “The Escapist”:
Billy’s from Scotland and is new to Red Scare. We just released his debut album, but on this tune he goes back to his roots as a busker from Edinburgh and gives us a stripped-down acoustic cover of a Nothington song. Nothington called it quits this year, but we put out a bunch of their records, so this was a fun way to involve them and give ‘em a classy sendoff.  As the comp winds down, I’m glad that we managed to get a lot of the long-time Red Scare bands PLUS a lot of the young upstarts, and this last track is a nice way of fusing the two generations. Bring it on home, Wee Billy!

Some final words… I wanna thank the many folks who helped put this compilation together and all the listeners who have been so supportive over the years. Lastly, thanks to Riot Fest for the opportunity to share these insights. Happy 15th birthday to youz too! 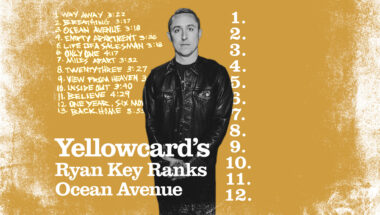 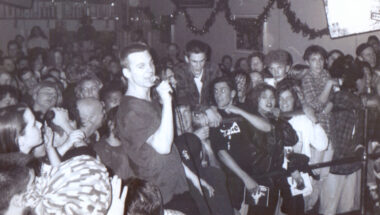