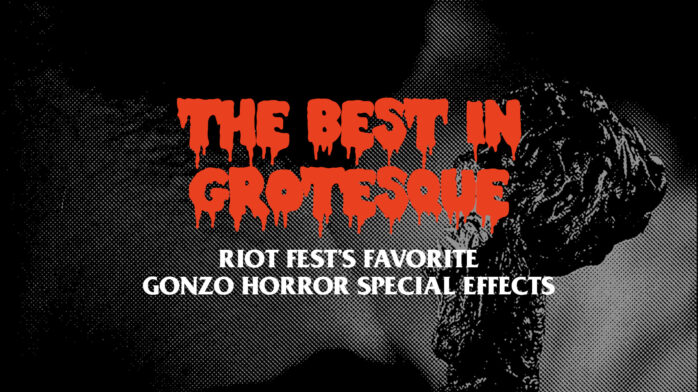 A list of the most hilariously repulsive special effects in horror films
By Dustin Krcatovich / October 30, 2019October 31, 2019 / Holiday, TV+Film

Some (boring) people rag on horror movies for being formulaic, but we honestly can’t think of an art form that offers a wider variety of visceral and psychological surprises. Good jump-scares and unsettling gore might seem an easy way to make an audience jump and squirm, sure, but it takes an under-appreciated degree of imagination to keep those shocks effective. The rarer, but increasingly popular, films whose terror is generated almost entirely by slow-creeping unease, perhaps punctuated by bizarre and striking imagery (yeah, we’re looking at you Midsommar, The VVitch, and Mandy… kudos for flippin’ the game!) get more credit, but are still seen through the lens of genre cinema.

All of the approaches to scaring an audience listed above are good, even great, and are worthy of more critical esteem. When it comes down to it, though, we’re fondest of perhaps the least respected form of horror: the gonzo gross-out. The best gross-out horror is not just violent, but funny, imaginative, and surreal; the films don’t elicit terror as much as a shocked “HOLY SHIT” and peals of satisfied laughter at the vulgarian audacity of the filmmakers.

Below, we’ve selected a few of our favorite gross-out moments for your entertainment and edification. These may not be the most unsettling or scariest things you’ve ever seen, but we contend that they will be among the funniest and coolest. Warning: we’re not responsible for any psychological scarring and/or vomit elicited by watching the clips below, so proceed with caution!

THE STIMULATED PINEAL GLAND, FROM BEYOND (1986)

This nutzoid classic by director Stuart Gordon (Re-Animator), loosely based on a short story by H.P. Lovecraft, is chock full of demented visuals, over-the-top performances, and more than its fair share of gross-outs. The story centers around a machine called the Resonator which stimulates the pineal gland, opening the “third eye” to reveal a frightening psychedelic world to its subjects. The scenes showing what’s happened to the machine’s inventor, Dr. Edward Pretorius (Ted Sorel), after having suffering the consequences of too much Resonator exposure, are a marvel of 1980s practical effects. Still, the most satisfying gross-out comes when his former assistant Crawford Tillinghast (Jeffrey Combs), who has spent most of the movie having his pineal gland stimulated by the machine, finally has said gland burst through his “third eye” area, which makes him want to eat brains for some reason.

Frank Henenlotter. Are there any two sweeter words (sort of) in the English language? Henenlotter is most well-known as the creator of the Basket Case series and Frankenhooker, all essential contributions to the horror-comedy canon, but Brain Damage gets our vote for his career high point, if only because it has Aylmer.

Aylmer is a leech-like, brain-eating parasite with the voice of John Zacherle (AKA beloved 1950s New York horror host Zacherley). He bonds with his hosts by injecting them with a highly addictive hallucinogen, then forces his host to eat brains (why do so many good movies involve brain eating, one wonders…?) in exchange for pumping them full of the euphoria-inducing chemical. It’s a great idea for a monster anyway, but Zacherle’s silky-smooth voiceover makes Aylmer as hilarious as he is genuinely gnarly. The scene below where he taunts main character Brian (Rick Hearst) with an old-timey song is particularly effective.

It’s debatable, one supposes, whether Riki-Oh: The Story of Riki really qualifies as a horror film, since it’s actually one of the more vaunted films in the “splatter fu” category (that is to say, a martial arts movie with really outrageous, cartoonish ultraviolence). Whatever the case, it’s firmly in the subgenre “Things That Rule”, so we’re not sweatin’ semantics too much. More than one viewer of the pre-Jon Stewart Daily Show in the 90s was introduced to Riki-Oh via a clip from the film used in the intro to host Craig Kilborn’s ‘Five Questions’ pieces, but really, it’s so much more than that.

There is so much outlandish violence in Riki-Oh that it’s impossible to pick a favorite part. Still, we managed to settle on this scene of a dog getting kicked in half, just because we’ve watched this movie a bazillion times and still can’t figure out why it happens, other than to illustrate that these superhuman prison guards are, y’know, really evil.

Director J. Michael Muro’s Street Trash is not a film for the faint of heart or easily offended — hell, we’re not even sure it’s for us, and we’ve got a pretty thick skin for tastelessness — but it does contain a few brilliant bits. The recurring leitmotif of fluorescent exploding guts is a thing to behold, perhaps the weirdest and coolest practical effect we’ve had the privilege to see, but it’s almost too unrealistic and oddly beautiful to be gross. Almost.

Indeed, the film’s most indelibly revolting scene is to be found elsewhere. Anybody who’s seen the film surely knows where we’re going with this: Street Trash is, to our knowledge, the only film that contains a wacky scene of junkyard hobos playing a carefree game of catch with a severed penis. It’s repulsive, it’s tasteless, and it gets dragged out for so long that it goes from shock-funny, to patience-testing, to audacious-funny. No mean feat! Obviously, the video below is not safe for work, or anywhere in decent society.