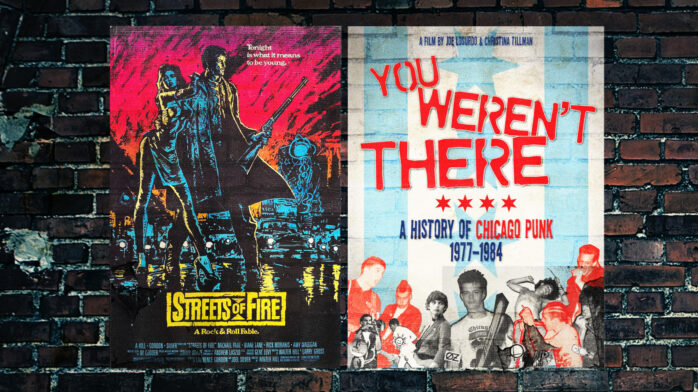 Punk Rock Movie Night: ‘Streets of Fire’ & ‘You Weren’t There’

A new column where we offer up the best pickings in punk cinema
By Dustin Krcatovich / January 24, 2020January 24, 2020 / Punk Rock Movie Night, TV+Film

In our new series Punk Rock Movie Night, our resident video store creeper Dustin Krcatovich handpicks two precious gems from the vast and mysterious world of “punk rock films” for you to share with your creep friends. Who’s bringing the popcorn and beer?

I, for my part, love all kinds of movies, from the most abstract experimental hoo-ha to the dopiest mainstream action slugfests. Still, the softest place in my heart will always be for the films which one might identify as “punk”—though I’ll be the first to admit that what constitutes punk film is at least as nebulous as what constitutes punk rock. So for this feature, I suppose my primary goal is to shine a light on scrappy DIY semi-obscurities, especially ones with a musical element, but as long as it’s a film I think any punks or punk sympathizers would like, it’s fair game.

With that in mind, we’re going to kick off this TV party by casting our eyes towards a film whose punk bonafides are pretty questionable, but whose appeal to punks (and really, anyone who likes a good time) should be clear as day. Both the films in our first double feature also show a little hometown pride, both being set in our beloved Chicago.

Streets of Fire is—or at least, was supposed to be—a mainstream Hollywood film. It’s a rock musical with epic songs written by Meatloaf’s right hand man, Jim Steinman. It’s full of action, romance, and no shortage of action hero one-liners from protagonist Tom Cody (Michael Paré). The filmmakers had plenty of money, some exciting young actors, and plenty of distinct visual ideas, shooting on a soundstage in LA to create a kind of dreamlike vision of Chicago (or more specifically, “The Richmond”). What could go wrong? Well, depending on your perspective, either nothing or everything.

Summarizing Streets of Fire is a challenge. Oh, sure, there’s a plot—in short, ex-military guy Cody is tapped to save rock singer Ellen Aim (Diane Lane) after she’s kidnapped by a biker gang led by Raven Shaddock (played by a perfectly hammy Willem Dafoe), an assignment Cody takes reluctantly since Aim is his ex—but that storyline is secondary to the excesses hung around it. Hill had a lot he wanted to cram into this “Rock & Roll Fable” and, fresh off the success of 48 Hrs., he was actually afforded the means to get it all in.

Thrown together, all these elements are downright surreal. Shaddock’s gang is a rockabilly leather crew whose aesthetic is somewhere between Teutonic and vampiric; Fear’s Lee Ving plays Shaddock’s right hand man Greer, and the Blasters are the house band at their hangout (two very LA touches for what’s supposed to be Chicago). This would all suggest that the film takes place in a 1980s version of the 1950s (think The Stray Cats), but at no point does Streets of Fire hem clearly to any one era. There are plenty of undeniably modern elements, and nobody in the 1950s looked anything like Tom Cody or Ellen Aim. Hill has said that this was intentionally designed to create a “timeless” feeling, but the feeling is more confusing as fuck than anything.

There’s plenty more to chew on, and it all tastes weird. Rick Moranis is cast wildly against type as hardnosed club manager Billy Fish (he of the perfect quotable leitmotif “It’s the shits!”). There’s a doo-wop group, The Sorels, who drive around in what looks like an armored military vehicle and inexplicably morph into a 1980s-style R&B group for their big closing number. The late, great Bill Paxton even makes an appearance as Clyde the bartender, a pompadoured goon who basically serves as a punching bag for scrappy ex-soldier McCoy (Amy Madigan).

It’s hard to make sense of it all, but to try is pointless. The inscrutability is part of the fun! Streets of Fire is one of the mostly supremely rewatchable films I’ve ever seen (I’ve watched it on the big screen three times in five years, and won’t miss any chance I get going forward), but unlike, say, Eraserhead, multiple viewings don’t make it make more sense. If anything, it probably makes less sense to me than ever.

Since Streets of Fire wasn’t actually shot in Chicago and is deeply unrealistic, it seems important to pivot now to something that represents the real Windy City, and what could be more real than a documentary about the dawn of Chicago’s punk scene? I’d imagine that most of our readers would agree that Chicago punk has gotten short shrift in popular historical recountings. Admittedly, the city was slower than New York, London, or LA to develop its own scene and sound, but when the scene found itself, it was pure Chicago: working class, gritty, and funny.

You Weren’t There recounts the early days with great anecdotes from the folks who were, in fact, there: members of such acknowledged legends as Naked Raygun and the Effigies are interviewed, but there’s also plenty about local favorites like Articles Of Faith, DA!, End Result, Savage Beliefs, and perhaps Chicago’s first punk band, Tutu And The Pirates. Verböten, the prepubescent punk band of Jason Narducy (Superchunk/Bob Mould Band)—who is now the subject of a new rock musical—even make an appearance. Obviously, Steve Albini is also featured extensively, but so are multiple stories about how the young Albini was maybe a bit of a dickhead, so a fun balance is struck.

The film has its share of rare performance footage, candid insider stories, and remembrances of venues long lost to the dust of time, just the kinds of things you’d want out of such a doc. All in all, You Weren’t There makes you wish you had been, but it also makes you want to go out and dig for some rare records. Sadly, it is deficient in that there aren’t any biker gangs wearing patent leather overalls, but hey, no film is perfect. Well, okay, maybe one film.

Streets of Fire is available on several streaming platforms, and was recently issued on a 35th anniversary blu-ray by Shout! Factory. You Weren’t There is available to stream or download on Vimeo. Happy watching!