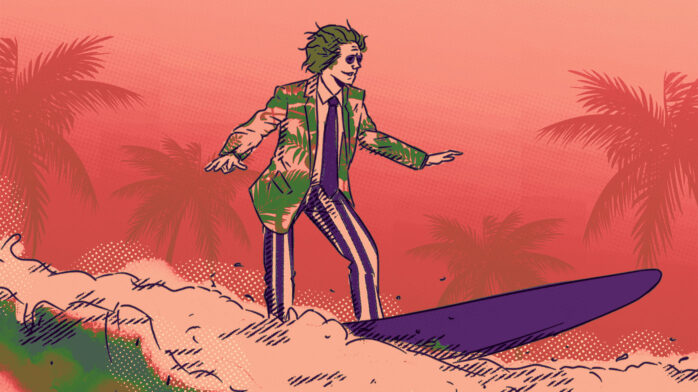 The Haunted Development Hell of the Shelved ‘Beetlejuice’ Sequel

People are too hard on sequels. Don’t get me wrong: many sequels are pointless and bad, and even some of the more entertaining ones are still feckless cash-ins. That said, while many sequels may not be “good” movies by a lot of metrics, is even that really such a bad thing? Furious 7 and Friday The 13th V: A New Beginning fail to check a lot of the official “good movie” boxes, but would the world be better without them? Not on your life, buster.

Still, some potential franchises have opted to tread more carefully (despite a guaranteed payday) in the interest of maintaining the credibility of the original. Tim Burton’s 1988 classic Beetlejuice is one of those, but that doesn’t mean that Burton, Michael Keaton, Winona Ryder, and a lot of screenwriters and studio execs didn’t try their damnedest to bring the Deetz family and their poltergeist frenemy back to the big screen. Would a Beetlejuice sequel have been good? The world may never know. Based on the ideas on the table, though, it almost definitely would have been wild.

Beetlejuice is Tim Burton at his most profitably Burton-esque: it made the director a name in Hollywood, and proved that he could make a blockbuster largely on his own terms. Beetlejuice indulged a penchant for German Expressionist design, wild animation, macabre humor, and punk-ish obnoxiousness with giddiness and economy, and raked in huge profits doing so. By 1991, fresh off the success of Batman, Burton had formulated a plan to expand the first film’s universe in the goofiest way possible: Beetlejuice Goes Hawaiian, a concept which would wed Burton’s love of Caligari and Camp, a Back to the Beach for Bauhaus fans.

The proposed plot was utter silliness: the Deetz family relocates to Hawaii so that dad Charles can spearhead the building of a resort, which is then found to be on the site of an old burial ground. Desperate to tamp down the spirits troubling the site, the family calls upon Betelgeuse to do their dirty work. In keeping with the strictures of the genre, the dramatic climax involved Betelgeuse winning a surfing contest.

Both Michael Keaton and Winona Ryder were on board with this absurd concept as long as Burton occupied the director’s chair. Ultimately, both Burton and Keaton settled instead on making Batman Returns, having been offered more creative control (and probably more money) for that project. That wasn’t the end of Beetlejuice Goes Hawaiian, though. Screenwriter Jonathan Gems (who later provided the screenplay for Burton’s Mars Attacks) had his first draft of the script put through the wringer by several others, including Daniel Waters (who ended up working on Batman Returns) and Pamela Norris (Troop Beverly Hills, Saturday Night Live). In 1996, Kevin Smith was invited to weigh in with his take, but rejected the offer in favor of another Burton-helmed project that would be doomed to development hell, Superman Lives.

This writer, for one, disagrees with these takes entirely. Beetlejuice Goes Hawaiian sounds like just what the doctor ordered! How else but a radical change in location—and thus potential for wildly different shenanigans—could Burton and co. maintain the energy of the original and ramp up the insanity at the same time? As an added bonus, the “beach goth” trend which surfaced in the last decade would have had a movie to call its own at its inception (and frankly, the trend probably would have come along sooner, which would have been nice… goths have long been in need of a little sun). I cherish the alternate reality where this film made it to theaters!

Fate had other plans, of course, but this wasn’t the last we’d hear of a Beetlejuice sequel. Serious rumbles started up again in the early 2010s, when Seth Grahame-Smith (Dark Shadows, The Lego Batman Movie) turned in a draft for a different take on a Beetlejuice sequel, with Ryder taking up the Lydia Deetz role 25 or so years after the events of the first film. Ryder went as far as confirming plans on Late Night With Seth Meyers in 2015, and Keaton and Burton both were publicly on board at multiple junctures.

As of last year, though, prospects appear to have fizzled. When asked what was happening with the project during press rounds for his Dumbo remake last year, Burton told USA Today “Nothing, nothing. I don’t know.”. Keaton seems resigned at this point to considering the first film “lightning in a bottle.” The thrill, as they say, is gone.

One might even say the project is… HAUNTED? Luckily, I can think of someone who might be able to help with a haunting. We just have to say his name three times.

You can catch Beetlejuice right before a live drive-in performance from New Found Glory this weekend at The Riot Fest Halloween Special. Tickets are still on sale.