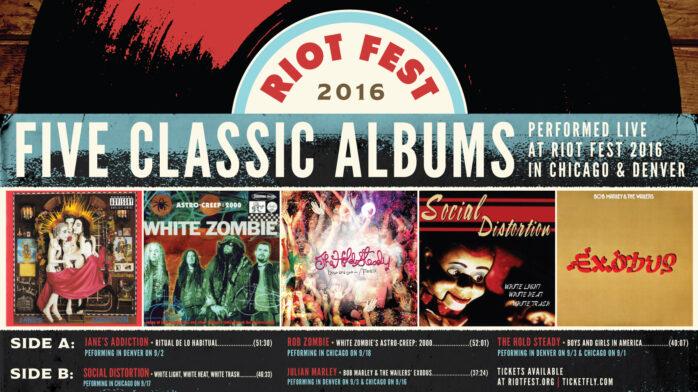 The Riot Fest Handbook to Impressing Your Friends

The Riot Fest Handbook
to Impressing Your Friends Although a generous segment of you—the Riot faithful—could effortlessly stand next to Trebek on an I-know-my-music-shit-better-than-you version of “Jeopardy,” there are still plenty of diminutive details that would cause you to fiercely cast blame on that sticky buzzer rather than publically taking a severe ego bruising.

But, we get it.  You’re the go-to-person within your tight circle of chums. You don’t need to bust out the iPhone during a terrible rendition of “Clampdown” by an even worse local opener to Wiki that The Clash recorded London Calling at Wessex Studios—even while your unconvincing drunk, close talking friends swear it was recorded somewhere in Jamaica.

Therefore, because we wholly believe that there’s nothing more awesome than a bunch of music-oriented Fibonaccies talking during “Been Caught Stealing,” we’re going to help you maintain your cerebral dominance over your friends with some possible little factoids from the Riot Fest 2016’s album plays. So, you know that barking dog sound bite at the beginning and throughout “Been Caught Stealing?”  Well, according to producer Dave Jerden, it was all an accident.

The story goes like this: Perry Farrell’s dog, Annie, would bark every time they walked into the vocal booth to cut the song.  With the booth door slightly open, the barks were recorded and caught on tape. They decided to keep the barks in the song because there was something perfect about it. Outside of Mike Ness and company performing one of our all-time favorite albums on the exact date 20th Anniversary of its release (Sept. 17, 1996) at Riot Chicago this year, the album sort of had two editions.

Striving to make the best album of their career, Social Distortion prepped a dozen songs in 1994 for recording, but producer Michael Beinhorn thought they could do better. When the album was finally released in 1996, all but two songs from first crop had been scrapped. Although it’s commonly known that the full name of White Zombie’s 1995 album is Astro-Creep: 2000 — Songs of Love, Destruction and Other Synthetic Delusions of the Electric Head, what may not be known is the source of a curious quote found inside the pretty great artwork within the album.

Inside the booklet, the quote “Convolutions and Fissures of the Outer Surface of the Spherical Hemisphere” appears and is probably unnoticed by most.  However, it’s strange.

As Chris Crum discovered on ihorror.com, the quote comes from Joseph R. Gay’s “Progress and Achievements of the Colored People.”  Now, we’re not going to even try to pretend that we understand its context or meaning in relation to the artwork and album, but, if we’re forced to guess, it might be in direct correlation with “Synthetic Delusions.” Although it is revered as one of the greatest albums ever recorded, a sizeable amount of the Exodus’ recording was done in the United Kingdom, not in Marley’s birthplace of Jamaica.

On December 3, 1976 an assignation attempt was made on Marley, his wife “Rita” and manager, Don Taylor.  Although he survived the incident with minor injuries, Rita was shot in the head and Taylor in the leg.  Although all three survived the incident, Marley left Jamaica shortly thereafter under a self-imposed exile and moved England — where he recorded the aptly named Exodus. In 2006, The Hold Steady released their third studio album, Boys and Girls in America. While some may think the title for the album comes directly from its opening words in “Stuck Between Stations”, the line actually goes back a little further. The full line goes, “Boys and girls in America have such a sad time together” and it comes from Jack Kerouac’s 1957 novel, On The Road.