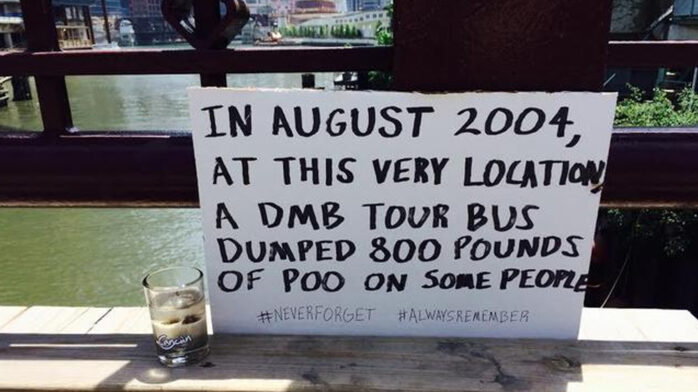 Today is the anniversary of one of the shittiest days in Chicago’s history.

A day that will forever leave a stain on the city.

For a city that is used to getting dumped on this one is still pretty crappy. I shit you not, this is a true story.

On the afternoon of Aug. 8, 2004, the bus driver for a Dave Matthews Band tour bus emptied the septic tank over the Chicago River, drenching passengers on a boat tour with 800 pounds of human crap.

As approximately 100 sightseers crossed under the grated Kinzie Street Bridge on the Chicago River enjoyed a scenic architectural tour, the skies opened up and the contents of the Dave Matthews Band’s tour bus toilet crashed into them.

Passengers on the boat “described a downpour of foul-smelling, brownish-yellow slurry that ruined their clothes and made several of them sick.”

After pleading guilty to misdemeanor charges of reckless conduct and water pollution, the bus driver was ordered to pay a $10,000 fine, do 150 hours of community service and serve 18 months of probation.

The Dave Matthews Band was allowed to continue making music.