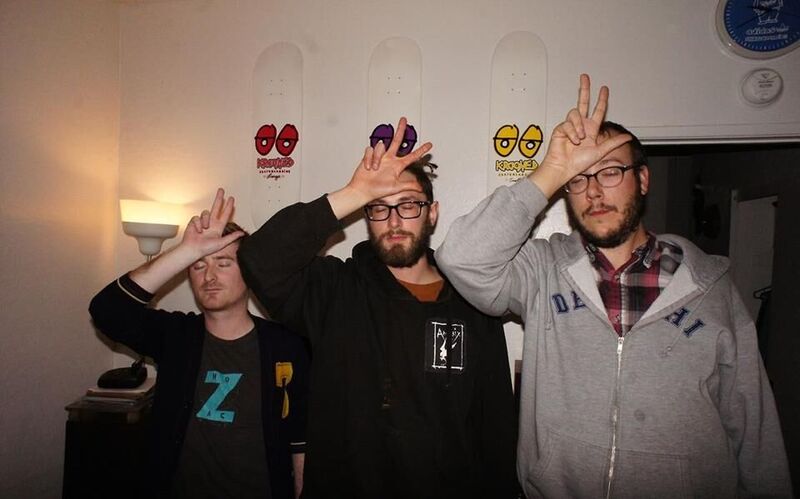 Hard Girls is a California punk trio with post-punk leanings comprised of of vocalist / guitarist Mike Huguenor, vocalist / bassist Morgan Herrell, and drummer Max Feshbach. The group formed out of San Jose’s independent music community in 2008 and have since released a handful of EPs, and three full-lengths, most recently Hard (Asian Man Records) in 2014. Word on the street says there is also a new record in the works for 2017 (check out a new track here). In addition to Hard Girls, the bandmates also perform with former Operation Ivy / Common Rider frontman Jesse Michaels under the moniker Classics of Love.

On Sunday, September 18 Hard Girls plays Riot Fest & Carnival. Come check ‘ em out, and before you do, read our 10 Questions as answered by the full band.

Max: The first record I ever bought with my own hard earned money was Punk O Rama Vol. 4- Straight Outta The Pit.

Mike: Deerhoof. Seeing them around around the Bay when I was growing up made me realize how open the possibilities are for music.

Morgan: The Ramones, I grew up in a lot of classic rock and classical music from my parents. The Ramones were the first band I heard where I thought, “Hey this is awesome! Maybe I could do this…”. Still one of my favorite bands today.

Max:  Propagandhi. I started listening to them around the same time I started listening to all those other Fat Wreck bands but they were the only band with any staying power. They were political and confrontational but had a sense of humor. It really opened a lot of doors for me. As they progressed and matured musically, it was also a gateway into heavier music and more melodic stuff like The Weakerthans.

Morgan: Bosse-De-Nage and So Hideous

Max: I stock up on canned beans before tour. Mostly black beans and garbanzo beans. Sprinkle on some nutritional yeast and tapatio and you’re in heaven. Mmmm!

Mike: The Obscene Bird of Night by Jose Donoso

Mike: Get into a heated argument about Benghazi with every security guard you see.

Morgan: Drink water? Bring your own if you can…

Max: Don’t sweat the small stuff. Actually, don’t sweat at all if you can avoid it.

Morgan: Too many guns, get rid of lots of em! Cops too…

Max: I have no plans to run until next election.

Mike: Getting the playlist ready for later

Morgan: Find as many people I love as possible and tell them I love them! Sex, music, food, go out with a bang baby!

Max: Have sex and eat food then die in the arms of my bandmates.

Morgan: “You’re All I Need to Get By,” by Marvin Gaye & Tammi Terrell

Max: I don’t know but I’m sure it’s a Motown song.