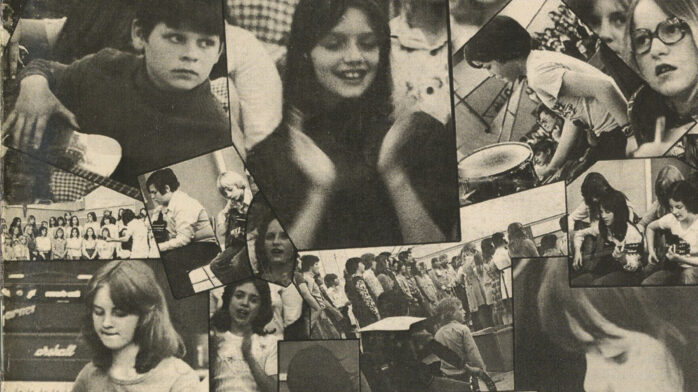 Originally recorded in 1976–77, The Langley Schools Music Project is a collection of musical recordings of children’s choruses from four different elementary schools in the Langley School District in British Columbia, Canada singing popular songs of the 1960s and 1970s.

The project was conceived by music teacher Hans Fenger who also wrote the musical arrangements. Inspired by a teaching theory from German composer Carl Orff who developed a way of teaching children about music that engages their mind and body through a mixture of singing, dancing, acting and the use of percussion instruments. As Orff said, “Since the beginning of time, children have not liked to study. They would much rather play, and if you have their interests at heart, you will let them learn while they play.”

So armed with a two-track and a school gym filled with a group of students who actually enjoyed the music, they started recording songs by David Bowie, The Beach Boys, Paul McCartney & Wings, Bay City Rollers, Neil Diamond, Barry Manilow and more.

The recordings, originally released on two 12″ LPs (1976’s Lochiel, Glenwood, and South Carvolth Schools and 1977’s Hans Fenger/Wix-Brown Elementary School) and pressed exclusively for the students, their classmates, teachers, and parents were never intended to be heard by a larger audience. And that’s the way it stayed, only known by a handful of people, until record collector Brian Linds found an original copy of the recordings at a thrift store. After bringing the record to Irwin Chusid, it was brought to and rejected by almost a dozen labels until it was released by Bar/None Records in 2001 as Innocence & Despair, a single-CD compilation of the two LPs.

I knew virtually nothing about conventional music education, and didn’t know how to teach singing. Above all, I knew nothing of what children’s music was supposed to be. But the kids had a grasp of what they liked: emotion, drama, and making music as a group. Whether the results were good, bad, in tune or out was no big deal — they had élan. This was not the way music was traditionally taught. But then I never liked conventional ‘children’s music,’ which is condescending and ignores the reality of children’s lives, which can be dark and scary. These children hated ‘cute.’ They cherished songs that evoked loneliness and sadness.

BONUS FACT: The idea for the movie School of Rock was inspired by this album.

Here are just a few of the recording off of The Langley Schools Music Project / Innocence & Despair. And check out some of the reviews of the album below.

‘Band On The Run’ – Cheap Trick

“The backing arrangement is astounding. Coupled with the earnest if lugubrious vocal performance you have a piece of art that I couldn’t have conceived of, even with half of Colombia’s finest export products in me.” – David Bowie (on the Langley students’ rendition of “Space.Oddity”)

“The effect of all those young voices singing ‘Calling Occupants’ is charming.” – Richard Carpenter, The Carpenters

“When I heard about the Langley Project, it seemed very interesting, but I did have the thought that it might sound like children singing off-key in a gym. The reality blew me away — a haunting, evocative wall-of-sound experience that is affecting in an incredibly visceral way. What an amazing CD!” – Fred Schneider, The B-52s

“I wish every school taught music like this. I wish every piece of music recorded in a school gymnasium were this haunting… and then I suspect that, if I listened to them right, maybe they would be.” – Neil Gaiman