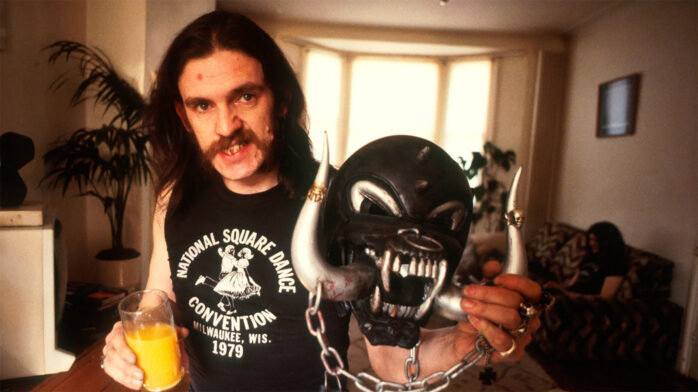 Motörhead will be releasing a new album on September 1st called, Under Cöver. The compilation will consist of 11 covers, including David Bowie, Ramones, The Rolling Stones and more.

Watch the newly released video above. They performed “Heroes” only one time live, in June 2015, at Germany’s Aftershock Fest.

ONE THING Lemmy Kilmister, Phil Campbell and Mikkey Dee liked to do over their years together in Motörhead, was grab a favourite song by another artist and give it a good old fashioned ‘Motörheading’. To run them through the Motörizer if you will. To rock them, roll them and even give them an extra twist and edge.

In celebration of some of those finest moments, the band will release Under Cöver, a collection of some of their best covers, and a collection which will include the previously unreleased version of David Bowie’s timeless classic “Heroes”. Recorded during the Bad Magic sessions in 2015 by Cameron Webb, and was one of the last songs the band recorded together.
“It’s such a great Bowie song, one of his best, and I could only see great things coming out of it from us, and so it proved to be,” says Phil Campbell, “and Lemmy ended up loving our version.”
“He was very, very proud of it,” says Mikkey Dee, “not only because it turned out so well but because it was fun! Which is what projects like this should be – fun!”

To that ethic, the rest of the album contains loud and proud, raucous and raging Rock ‘N’ Roll takes on the likes of “God Save The Queen” (Sex Pistols), “Cat Scratch Fever” (Ted Nugent), “Rockaway Beach,” (The Ramones), Breaking The Law” (Judas Priest) and “Whiplash” (Metallica) which earned the band a Grammy in 2005 for Best Metal Performance.
“We were happy with them at the time and we’re happy with them now!” affirms Campbell, whilst Dee says, “We should remember that it’s about having some fun with songs that we all loved.”

So there you are. If that doesn’t have you scrambling for your music delivery device, then check your pulse pronto. Or just start scrambling for a copy of Under Cöver immediately. You won’t be sorry.