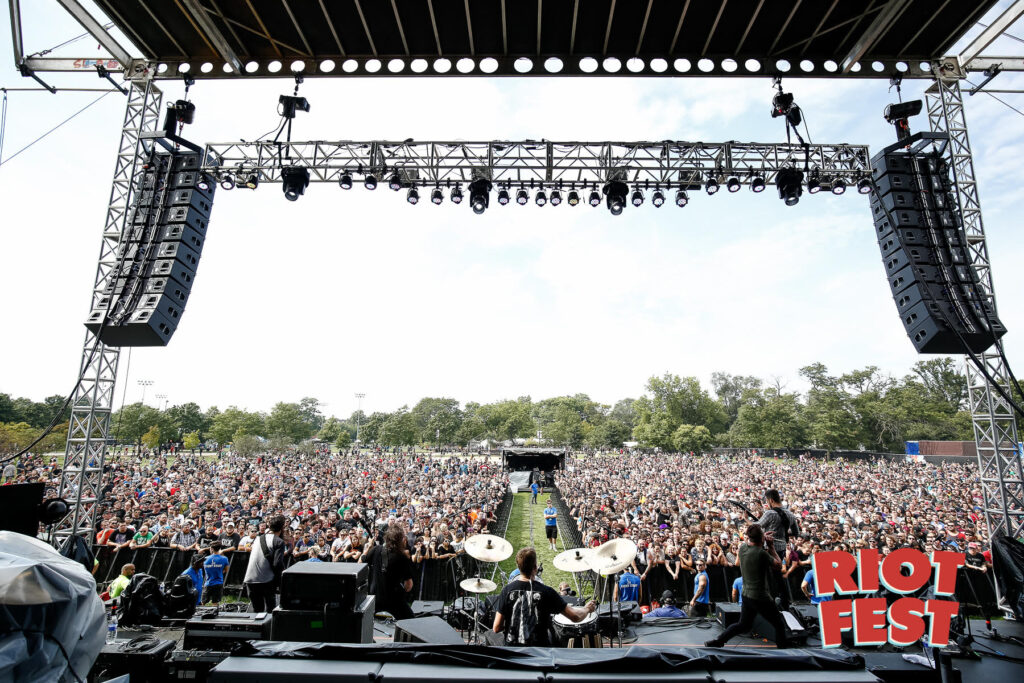 As the Riot Fest staff gets ready for the culmination of a very long year and a lot of hard work, we asked them to tell us about some of the artists they are most looking forward to see this weekend (not that they actually get to see many of the performances). Obviously, Nine Inch Nails and Queens of the Stone Age and Jawbreaker are the highlights for all of them, but we wanted to see what else they had on their lists.

We’re excited to see you at Riot Fest! Have fun, and see at least one band you’ve never heard of this weekend.

I first heard Skating Polly while scouring through [email protected] emails in early 2014, fielding some of the typical pre-lineup announcement inquires that come in (“When is the lineup being announced?!” “Same time as last year.”) As you can imagine, a good chunk of our fan mail during that time are submissions to play the festival. Any submission is statistically a long shot—we hear from way more bands than there are available slots—but we do make an effort to listen to as many as we can. Upon clicking on a link in Skating Polly’s email, I discovered two teenage sisters revitalizing the riot grrrl sound with a song called “Ugly,” which had been released the week prior. I was impacted by their sincerity, and it blew me away.

Unfortunately, that year’s festival was already filled to the gills. I remembered that email the following year, and was happy to be able to invite Skating Polly to play at Riot Fest 2015 in both Denver and Chicago. Denver was first; I remember hearing some buzz after their set but wasn’t able to catch any of it myself. I made sure to not miss out in Chicago, where they were the first band up on a stage that was pretty close to my post. I snuck over for a couple songs, and they were great! They were poised and commanded the attention of the Sunday-morning crowd gathered in front of them. After a few songs, Kelli (Mayo, who had been on bass) and Peyton (Bighorse, who had been on drums) traded instrument duties and seamlessly ripped into “Nothing More Than A Body.” I don’t think anyone saw it coming! Skating Polly may have been young, but that didn’t stop them from really rocking!

Kelli and Peyton have continued to work hard since those shows, and they have a pretty impressive resume to show for it. In addition to releasing a full-length album and EP—and bringing their brother Kurtis in as a third member—Skating Polly has shared stages and written songs with some of their heroes, including Babes In Toyland, X, and Veruca Salt. If you want to see the younger generation show the olds how it’s done their way, don’t miss Skating Polly kick off the Riot Fest weekend on Friday at noon on the Roots Stage.

Asking which band I want to see most at Riot Fest is a question not easily answered. I want to see at least half the bands on the bill. It’s the one festival every year where I genuinely like the majority of the bands on the lineup. I guess that’s bound to happen when you are one of the folks who facilitates the addition of said bands to said lineup.

While I’d love to see Nine Inch Nails, Queens Of The Stone Age, Jawbreaker, New Order, Wu-Tang Clan or any of the other 40+ artists I genuinely love, the one band whose set I will make sure to be there for is Sleep On It.

I’ve known of Sleep On It since 2014, and started booking them on shows shortly after that. I’ve seen that band work their asses off over the past three years. They’re all smart, humble, hard-working guys who happen to make incredible tunes.

So if you’re wondering where I’ll be at 1:50pm on Friday, it’s at the Radicals watching the guys in Sleep On It make Chicago proud.

At the Drive-In were hardly the only band in the late ’90s trying to figure out how to combine the nervy aggression of post-hardcore, the cathartic melodicism of first-wave emo and technically challenging prog and post-rock–they were just the best at it. When the band first stormed the scene with their 1998 album In/Casino/Out they seemed like they’d come from another planet, or the future (or both), instead of El Paso, and nearly 20 years later their early work still sounds far ahead of the curve.

Beach Slang got me early on, in the fall of 2014, and I have been a super-fan ever since. This is a band that matters. Their lyrics touch upon all of the joy, love, lust and confusion that encapsulates growing up as a wide-eyed outsider. People get tattoos of these lyrics. You might say that Beach Slang’s songs are about passion and being passionate, and that’s exactly how their fans respond when they play live.

There’s something about seeing Beach Slang live that just feels right. The Replacements-meets-Gin Blossoms guitars bounce off the drums in all the right ways. Frontman James Alex, dressed like a punk rock carnival barker, leads his band of aces through garage-y, cathartic rock ’n roll bliss at a sprinter’s pace, often tossing in a cover song or a fan request on a whim. It’s a wild thing to be a part of.

For me, Beach Slang captures everything that’s great about Riot Fest. They are, as one of their album titles says, A Loud Bash of Teenage Feelings. And to me, that’s what Riot Fest is all about. It’s about people getting together and celebrating the music that mattered when they were young and still matters to them now.

I’ll be there in the pit on Sunday at 12:40pm, getting loudly bashed by Beach Slang and all the teenage feelings that their music conjures up.

Vic Mensa gave the best performance of Lollapalooza 2016, and I wouldn’t expect anything less at Riot Fest from the Hyde Park native. From his track “16 Shots,” about the death of Laquan McDonald—who was killed after being shot 16 times by Chicago Officer Jason Van Dyke in 2014—to “Free Love,” a track he released to show support for the LGBTQ community, Vic Mensa is honest, powerful, and emotional, and I can’t wait to see what he has in store for Riot Fest.

I don’t get to see many performances over Riot Fest weekend, one of the downsides of the job, but here are my top 10, hopefully I’ll be able to see a few: Downtown Boys, Buzzcocks, GBH, Knuckle Puck, Bad Brains, Peaches, T.V. on the Radio, Danzig, Mike D, Dead Cross. Oh and Shabazz Palaces! That’s 11. Whatever. Go see all the bands.

As most people in the office and around me are aware by now, I’ve been a huge Paramore fan since I was younger. I remember buying All We Know Is Falling and playing it in the car repeatedly in order to memorize every lyric. Little Monique wouldn’t believe me if I told her she’d be working on their advertisements and naming desserts after them as an adult.

For those who grew up with Paramore, the debut of the newest album After Laughter garnered mixed reviews. So many were accustomed to a Riot!-esque Hayley Williams that anything that strayed from that wasn’t expected. But the best part of growing up with Paramore, is that as an adult you realize how human your heroes really are.

The newest album might sound different, but it serves as a friendly reminder that growing into a new person is okay and welcomed. Paramore has always put on a high-energy and spectacular live performance. You can catch me singing along to their set surrounded by some of my best friends. So by singing, I mean crying.

I’m not sure if they allow The Cred(ential) Keeper (that’s me) to leave the box office to see shows, but maybe, just maaaayybe, it will be chill enough by Sunday evening for me to sneak away to see a bit of this boss lady show us how “Bad Girls” do it (well). I’m not super familiar with her catalogue, but I know I dig her style. I love hip-hop, especially strong female rappers who sing about real issues. And from what I’ve read on the inter-webs, she’s got some serious real-life experience from which to draw inspiration. Looking forward to seeing what she brings to the stage (and what dope outfit she’ll be wearing on it).

As we celebrate the 20th anniversary of one of the greatest records of all time, the time is upon us to reflect on the message of Let’s Face It’s title track. “Let’s Face It” is as true in 2017 as it was in 2017 (even the Washington Post agrees, #RealNews), and for fuck’s sake, I hope it’s not still needed in 2037. But if it is, this timeless gem will definitely stand up over the years with its universal message of love, acceptance, and eschewing hate. Take care of each other out there, and enjoy the festival. See ya in the Bosstones’ pit!