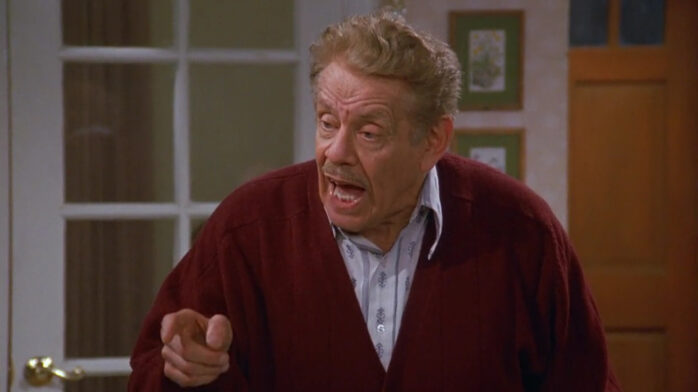 We’ve Got A Lot of Problems With You People, and Now You’re Gonna Hear About It!

That’s right, you ingrates. Gather around the Festivus pole for the traditional Riot Fest Staff’s Airing of Grievances. Learn them. Know them. Live them… Or stay out of the way.

If you wish to fire back, you can participate in today’s #RiotFestmas contest. Let us know how society has disappointed you in 2017 by posting your grievances to our Facebook, Twitter, or Instagram, using the hashtag #RiotFestivus. If we announce your name at 7:00pm CST, you’ll win a $25 donation in your name to The Human Fund (yes, it’s really a thing, supporting arts education programs in Cleveland; that’s money for people, I suppose), a 2018 Seinfeld quote wall calendar (pictured below), and a pair of Riot Fest 2018 GA tickets. [insert Festivus miracle quip here]

Now, without further yada yada yada, we’ve got a lot of problems with…

It’s the end of 2017, and I still haven’t made time to learn the correct time and temperature for properly frying an egg. Every time, the end result is either a yolk explosion all over my jeans or overcooked, flavorless yellow rubber. This aggrieves me. I need to tighten up my egg game for 2018, because for all I know, President Mar-a-Jag-o-Lantern is going to turn them into an Alt-Right dog-whistle or something, and then I won’t be able to enjoy them anymore. Well, Happy Holidays!

For my birthday this year, one of my bosses gave me a Home Run Inn frozen pizza — my favorite — and I put it in the office freezer, with the intention of cooking it and sharing it with my coworkers. When that day came, I opened the freezer, and the pizza was gone. The empty box was in the recycling bin. I’m not saying it was Riot Mike… I’m just saying. #shotsfired #thereisapizzathiefamongus #snackstealers

I buy a great assortment of snacks and treats — fudge stripe cookies, fruit snacks, sandwich crackers, the works — to enjoy at my desk during stressful work day. And someone decides to walk over to my desk, open my drawer, and eat them. You know what’s left in my desk now? Nothing but a pack of cigs and half a pack of gum!

Oh, and don’t even get me started about my boss, Riot Mike… I swear to god, the sound of the vociferous packing of a cigarette box now triggers my fight or flight response.

I made a relatively funny tweet about playing the Phil Collins song “In The Air Tonight,” and how if you push play on the song at 11:56:20 on New Year’s Eve, the drum solo will kick in at exactly midnight. Not my best work, but mildly entertaining.

If you play ‘In The Air Tonight’ by Phil Collins at exactly 11:56:20 on New Year’s Eve, the drum solo will play at exactly midnight.

Well, Phil Mother Fucking Collins made a very similar tweet a few days later, which was lauded as the “best tweet ever,” and as a result, “Phil Collins won the internet,” and all we got was shit.

If you play ‘In The Air Tonight’ by Phil Collins on December 31st at 11:56:40 the drum break will play right as the clock strikes midnight. Start off your new year right.

You know what you did Phil. Even though it was probably a total coincidence, I won’t forget this. Also, the correct time to start “In The Air Tonight” is 11:56:20 like my tweet said, NOT 11:56:40, as you say in your tweet. You don’t even know your own song! This isn’t over, Phil.

Hey, you kids with your pocket telephones, stop tagging me on social media! In fact, stop tagging anybody who doesn’t ask for it. It’s an invasion of privacy, and more importantly, it’s fucking annoying.

Not nearly as annoying, however, as our boss Riot Mike’s blatant disregard for preventative auto maintenance.

Since she is indeed Riot Fest’s marketing director, Katie is aware of you peoples’s attention spans, so she’s submitted a clean, concise, bullet-pointed list of grievances for us to air. Katie’s got a lot of problems with…

Speaking of clean, concise, bullet-pointed lists of grievances, Jen’s got a lot of problems with…

• Jerks who honk as soon as the light turns green… Chill!
• Typos in published novels… C’mon!
• The complete lack of understanding nor acknowledgment by the general public that further and farther have different meanings… Google it!
• The keyboard clicks noise on iPhones… Unnecessary!
• Supposively… Ugh, *eyeroll*
• Riot Mike wears his sunglasses indoors… Not very bright!

Grievances from the Riot Fest basement office (aka The Dungeon):

• There’s no sunlight
• We don’t have regular access to snacks
• It’s cold in the summer
• It’s even colder in the winter
• There are lots of centipedes
• No one knocks before entering our offices
• The basement is the default storage area for everything
• The upstairs people make a lot of noise (Who knows what they’re doing? God knows it’s not work!)
• Sometimes you listen to your office neighbor play Drake on repeat all day for several days straight
• There is a shower in the basement bathroom, but nobody knows if it works, because nobody has tried
• It’s lonely
• Having to walk upstairs to fill up your water bottle
• We feel like we’re going to die every time we use the steel spiral staircase to the upstairs
• The faucet in the basement constantly streams such cold water that we don’t wash our hands ever
• That one time it kind of flooded
• They took away the arcade games that we never used… Not cool
• They also took away the TV that we never plugged in… Also not cool
• The upstairs people think they’re better than ​us

[Riot Mike blew out his engine while under assignment to make his list, therefore Riot Mike has taken issue with his engine, in addition to already being aggrieved with his ungrateful employees.]

If a Festivus miracle doesn’t come your way via today’s contest, be sure to enter THE HO HO HAUL grand prize sweepstakes. For the chance to win all of the other prizes from the 12 days of #RiotFestmas, as well as a pair of freakin’ Deluxe VIP passes to Riot Fest 2018, go to here. That’s over $3,000 worth of crap to not put beneath the pole!

If December 25 comes and goes and you haven’t won anything, you’ll be glad that you went ahead and saved money on Riot Fest 2018 Holiday Presale Tickets. There are only two more Festmas days left in which to be fiscally responsible!