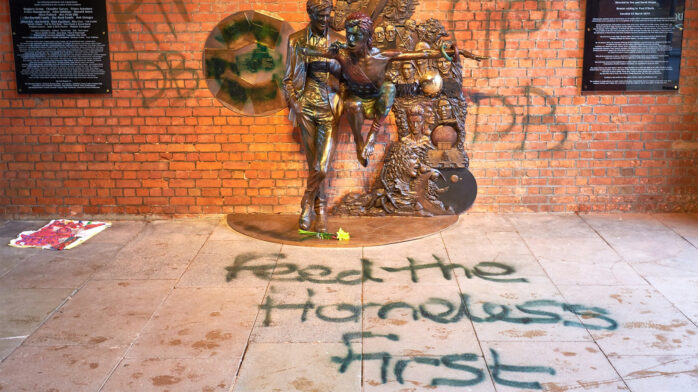 A new statue of David Bowie that was unveiled in Aylesbury, England on March 25th was vandalized less than 48 hours later.

RIP DB was sprayed behind the statue, while Feed the Homeless First was painted in green on the ground in front of the it… an apparent reference to someone feeling that taxpayer money should be spent on other things.

The bronze sculpture, named Earthly Messenger, was privately crowdfunded through grants, and over £119,000 was raised (on a £100,000 goal) by Bowie fans via a Kickstarter campaign.

The graffiti will most likely have to be cleaned up with taxpayer money, however. Helen Light, from Aylesbury, told the BBC, “Vandalizing it is awful. Tax payers will now be paying for the cleanup, so it’s the vandal who will ironically be taking money away from the homeless.”

In an interview with BBC, the man behind the statue — music promoter David Stopps — said that the statue is “a public piece of art, and we’ll keep looking after it on a daily basis. There is a webcam on it 24/7; so whoever did it, we’ve got them on webcam.”