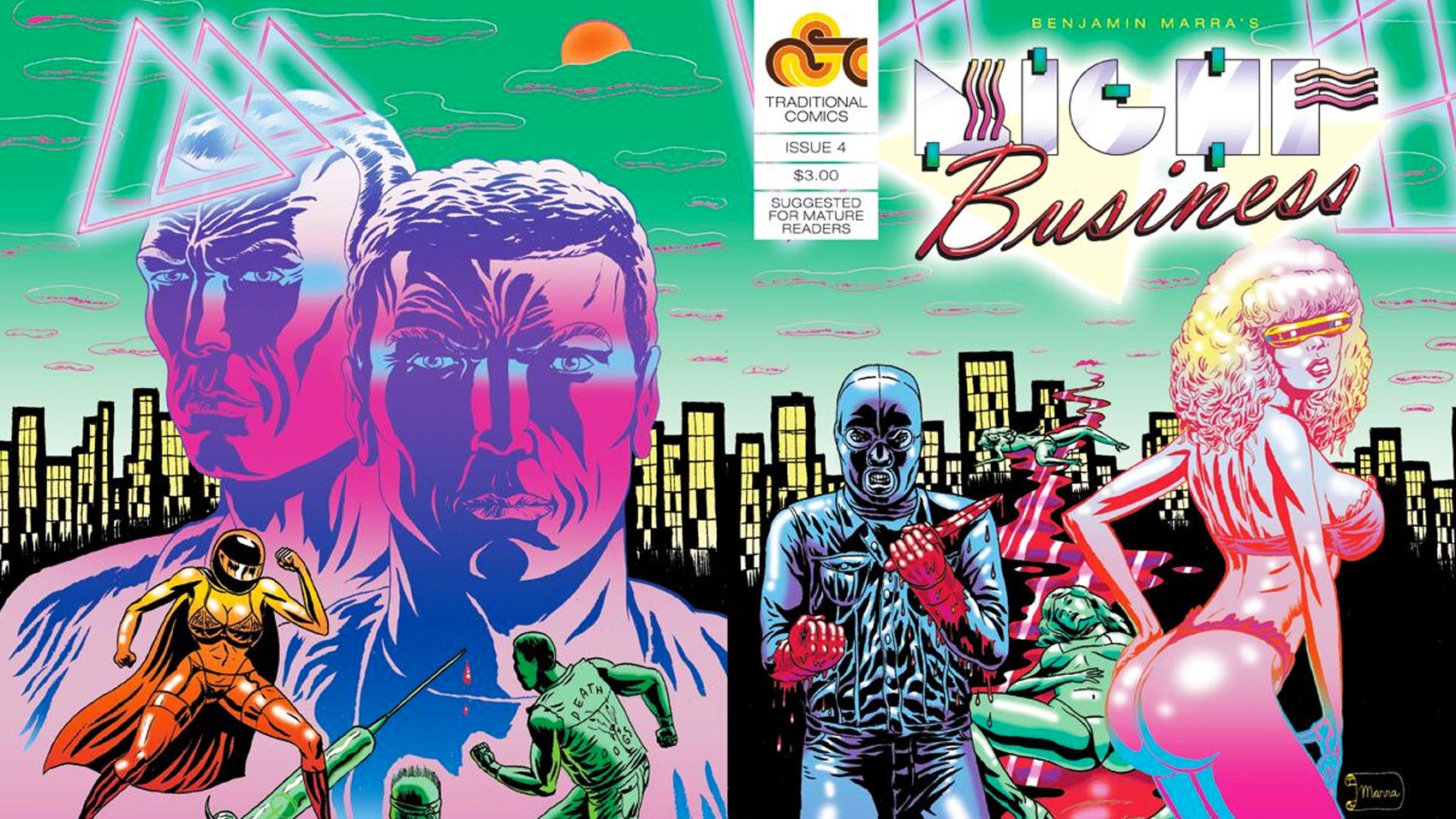 Benjamin Marra is a modern renaissance man, full of naïve teenage underground comic ethos and outrageous cult movie grime. He hit the scene with the super mega insane graphic novel Terror Assaulter, and followed it up with his years-in-the-making giallo-inspired book, Night Business.

Marra’s work has also been seen in the pages of Playboy, Rolling Stone, and the New York Times. Recently, his florescent, eyeball-numbing artwork for the Numero Group’s psych rock collection, Warfaring Strangers: Acid Nightmares, garnered him a Grammy nomination.

Riot Fest caught up with Marra to chat about how his career path, how awkward it is to lose at the Grammys, and, of course, giant squids.

RIOT FEST: What comics did you grow up with?

BENJAMIN MARRA: First there was like, Tintin and stuff like that. But then, when I was left to my own devices in a comic store, I was really interested in the black and white boom, and the anthropomorphic animal comics that were leeching off of the success of Teenage Mutant Ninja Turtles.

Yeah, like that, Hamster Vice, and the Samurai Penguin. I would buy the shit out of all that. Then it took me a while to get into X-Men and traditional comics, because I thought that they were kinda square looking. They didn’t have the raw weirdness that I was attracted to.

But the main comic that really had an affect on me was Derrick Robertson’s Space Beaver. [Robertson] went on to, of course, have wild success in mainstream comics drawing Transmetropolitan, but he first started out as a teenager drawing  Space Beaver. It was a black and white newsprint comic about… a space beaver [laughs]. It’s obscenely violent, and was shocking to me, as I was like 10 or something. To look at this really cute space beaver shooting lasers through wolf guards and exploding guts everywhere was a shock.

Later on, I was exposed to a lot of underground comics and stuff that was not only pushing the boundaries of content, but also drawing itself and the formal aspects of making comics, and what good drawings are vs what bad drawings are — and whether or not there is a hierarchy. I had fine arts background when I was in school, and fine arts can get pretty fuckin’ crazy in some realms. I was exposed to crazy comics and crazy fine arts, so that’s what I grew up on.

Starting out, you worked as a page designer for two newspapers. Were you making comics at that time?

First of all, I was really struggling after grad school, and working with newspapers around that time. I was really just trying to figure out what I wanted to do with art.

Finally, around 2007, I was working at a newspaper outside of Philly and started drawing Night Business. I tried to forget everything I’d learned up to that point, and went back to what I’d liked about drawing when I was a teenager—the basic joys of [it]… and that kind of got me over that mountain.

It’s funny, I’d bring it to my work and when there was a lull, I’d pencil or letter. I’d finished lettering the first issue of Night Business and went to take the train home; and while I was scrambling to grab all of my stuff, I left the whole first issue on the train platform. It wasn’t until a few stops later when I realized I was missing it! I went back, couldn’t find it, and lost [all the sketches] of the first issue.

So, I waited a week and restarted it all over again, and it wasn’t all that bad. It took me like a week—I had it all memorized. So, the first chapter of the Night Business that we see today is an unintended second draft. The first pencils were different too; it was a slightly different telling of that tale.]

Night Business was the first thing I did—10 years ago—and then fast-forward nine years to 2016, when I realized that I wanted to finish Night Business, and Fantagraphics was like, “Yes, we want you to do that,” because that was the book that actually got them to notice my work. I then spent six months finishing the last six chapters.

Night Business is a weird book because I worked on the first four issues from 2007 to 2009, took a break for about seven years, did a bunch of other comics and projects, and then went back and finished it off. That’s why it doesn’t really fit as a natural progression from my other books, like Terror Assaulter… It’s kind of its own weird thing.

Abel Ferrara’s seedy, prostitutes-in-peril gem Fear City and the insane 80s action flick American Hunter have been known as inspiration for Night Business and Terror Assaulter. I watched both today just to get into your headspace and man, they’re hot.

Yeah, what’s funny is that I’ve never seen all of Fear City. I’ve purposefully stayed away from it, because it’s obviously the direct influence for Night Business.

Once, while watching the Olympics and flipping around the channels during commercial breaks, ABC’s late-night movie was Fear City. I was watching about five or six giallo movies a week at the time, and I was really hellbent on making a giallo comic. I had no intention of ever making this comic for anybody else other than me; I just wanted to make something to show to publishers to get a job drawing Swamp Thing or something.

So, I found Fear City on the tube and gleamed enough while flipping back and forth to know what my comic was going to be about. Using that movie’s premise, I was going to make it a giallo comic and then it all came to me—I’m gonna call it Night Business! It was just one of these moments when inspiration struck. Now that Night Business is done, I can probably finally watch Fear City [laughs].

I was living in Brooklyn at the time, and I’d go to Spectacle Theater, a DIY movie house that would show these really crazy obscure films. They cut their own trailer for American Hunter that inspired me make the comic book adaptation of that movie… and I hadn’t seen yet! I made the first chapter of Terror Assaulter and then saw all of American Hunter at Spectacle Theater. I love all of Arizal’s movies.

There’s something really special about late-80s Indonesian action films that really nails this hilarious, badass vibe. In the first few minutes of The Stabilizer, a motorcycle flies through a window. That’s the kind of pacing I like.

Which is exactly what Terror Assaulter is—it’s bonkers!

Yeah, I was surprised when I found out that Fantagraphics really liked it. It’s a very experimental comic for me, because it plays on what you can do with comics… and what you shouldn’t do with them. It was just me fucking around for a hundred pages. I was shocked that a lot of people liked it.

Warfaring Strangers: Acid Nightmares was nominated for a Grammy for Best Boxed or Special Limited Edition Package. What was attending the awards ceremony like?

I saw pictures of you throughout the entire night on Instagram, and it looked amazing and bizarre.

Yeah, it was exactly that. First of all, I was shocked and surprised to get that nomination because that’s not my area. I do work in music sometimes, but it’s normally not my thing. It was an interesting peek behind the curtain.

Walking the red carpet was intense: We had our photos taken, and people were dressed in these spectacular outfits… It felt like prom. It was exciting, yet very anxiety inducing. It was cool, though; We got to meet members of Mastodon, which was nice.

Our award was the first announced, so we lost immediately. It was expected that we’d lose.

Who’d you lose to?

We lost to the Voyager Golden Record, the album that Carl Sagan and his wife picked out to travel with in outer space. Neil Degrasse Tyson presented the award.

So you knew you were screwed?

Yeah, even the night before, when we were hanging out with the Numero Group, they were like, “Yeah, we’re going to lose because they’ll never give an award to an album that promotes hallucinogenic drug use.”

Do you listen to music while you’re drawing? Do you have a TV on?

I mostly listen to audio books, because I’m a narrative junkie. I really need stories all the time to engage my mind. I’ll also have a TV show on from time to time; or a movie if I can find one, which is rare. Recently, I’ve been obsessed with listening to whatever dungeon synth I can find.

Tell me about dungeon synth.

It’s an offshoot of some musical experimentations of black metal. There are a few albums—like Burzum, I guess—that are basically just synthesizers. A lot of it is based on Tolkien mythology—especially the evil aspects—and a lot of it is like really good Dungeons and Dragons theme music. I like it because it sets a nice tone. I’m also a big D&D fan. I play a lot of role playing games. I’m attracted to anything that can set up that mood properly.

I just finished watching the CNN documentary series that Tom Hanks made about the different decades. I just watched the 80s one, and that was nice. People really hate nostalgia these days, but I like time traveling back to my 10-year-old self and re-experiencing things that I’ve forgotten about from growing up—like that feeling of watching Twin Peaks in my living room.

It’s wild seeing things from your past in chronological order. It’s like The Stabilizer and American Hunter. You see? It all goes back to Arizal!

What’s it like having a Patreon [crowd-funding campaign], and what can people expect by joining yours?

Patreon is great; I really like it. It’s like a personal document that I’m sharing with people who really want a deeper insight into what I’m currently working on, as though it’s a social art project. My entire next book will be up on Patreon in multiple forms. I’m going to post the pencils, the layout, the sketches, and the final inked and colored pages. Watching its creation from nothing in real-time will provide the reader with a much richer experience.

If you were to have an evil animal mascot, what would it be?

Oh man, I guess an evil giant squid, like the one from 20,000 Leagues Under the Sea. He’d be in the water somewhere.

You’d have to go visit him.

I think they live deep in the water. They’re bonkers, man.

Jeremy Wheeler has a colorful, twisted mind as well. Get a look inside with his recent Monsters of Ink profile. 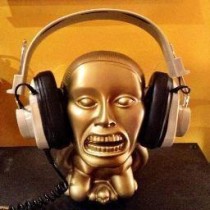