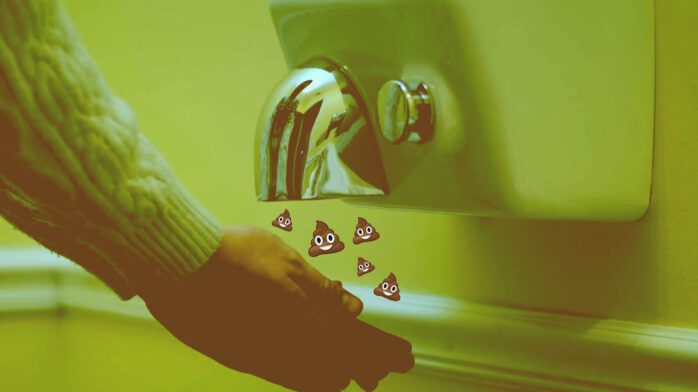 A recent study in the science journal Applied and Environmental Microbiogy—a great bathroom read if you can find it—found that those ubiquitous bathroom hand dryers that help reduce the use of paper towels (while not completely drying your hands) also suck in fecal matter, then blow it all over your hands.

In the shit-tastic study, “Deposition of Bacteria and Bacterial Spores by Bathroom Hot-Air Hand Dryers,” researchers, um, researched 36 bathrooms at the University of Connecticut School of Medicine and found out that we are basically just surrounded by poop. Fecal particles float into the air when you flush the toilet without closing the lid, creating what is known as a toilet plume.

Newsweek was the first to break this news, and interviewed Peter Setlow, the author of the study and frontrunner in the 2018 World’s Shittiest Job contest. “Bacteria in bathrooms come from feces, which can be aerosolized a bit when toilets, especially lidless toilets, are flushed,” Setlow told the magazine, presumably with a straight face.

“These results indicate that many kinds of bacteria, including potential pathogens and spores, can be deposited on hands exposed to bathroom hand dryers, and those spores could be dispersed throughout buildings and deposited on hands by hand dryers,” Setlow added, as his children most likely cowered in fear in advance of their school’s upcoming career day.

While the study shows that bathroom hand dryers are great at dispersing poop particles directly on your hands, the study wasn’t able to show that they really make a difference in spreading the already poop filled air.

In either case, Setlow made sure to note that all 36 of bathrooms that participated in the study now have paper towels.