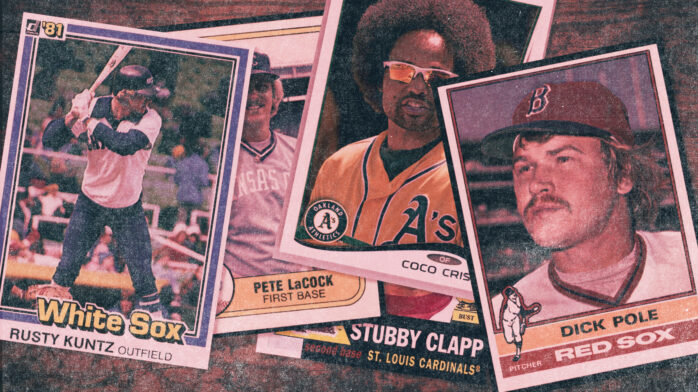 Keep Your Johnny Dickshot Away From My Rusty Kuntz

Baseball, probably more so than any other sport, is filled with a rich history of spectacularly amazing names and nicknames (most of which are just dick jokes). So, in honor of the greatest sport ever invented, we’ve put together our All-Star team of great baseball names.

PETE LaCOCK
First Base
Ralph Pierre “Pete” LaCock, Jr. played for the Chicago Cubs and Kansas City Royals from 1972-1980. He also played a season in Japan for the Yokohama Taiyo Whales in 1981. Though “LaCock” translates to “The Cock” in French, he’s actually a very nice guy.

STUBBY CLAPP
Second Base
Born Richard Keith Clapp, Stubby is a nickname passed down from his father and grandfather, which actually makes him Stubby III. He amassed a whopping five hits over 23 games played for the 2001 St. Louis Cardinals.

SNUFFY STIRNWEISS
Third Base
George Henry “Snuffy” Stirnweiss played Major League Baseball between 1943 and 1952, spending most of his career with the New York Yankees, before ending his playing days with the St. Louis Browns and the Cleveland Indians.

JACK GLASSCOCK
Shortstop
Mr. Glasscock had an injury plagued career with nine different teams between 1879 and 1895. We blame his name.

JOHN WOCKENFUSS
Catcher
Mr. Wockenfuss, affectionately known as Fuss to Tigers fans, played for the Detroit Tigers and Philadelphia Phillies between 1974 and 1985.

RUSTY KUNTZ
Outfield
Rusty Kuntz (pronounced coon-ts, you sicko) split his time from 1977 through 1985 between the White Sox, Twins, and Tigers. His career highlight was most likely hitting the deciding R.B.I. in the Detroit’s 1984 World Series win. He became a coach after his playing career, and was the first base coach during the 2015 Kansas City Royals World Series Championship.

JOHNNY DICKSHOT
Outfield
John Oscar Dickshot, commonly known as “Ugly” Johnny Dickshot (because his name wasn’t inappropriate enough already), played parts of six seasons over 10 years for the Pirates, the New York Baseball Giants, and the White Sox. Actually, his extra nickname was self-inflicted: They called him “Ugly” because of his self-proclaimed (but not fact-checked) status as the “Ugliest man in baseball.”

COCO CRISP
Outfield
Covelli Loyce “Coco” Crisp, a real person named after cereal, is a real Major League Baseball player. Crisp played for 15 seasons, doing time with the Indians, Red Sox, Royals, and Athletics. He won the World Series with Boston in 2007. It can’t be understated that he’s named after cereal.

Warming up in the bullpen, we have:

LEDELL TITCOMB
Left-Handed Pitcher
Ledell Titcomb was the son/victim of Fanny Titcomb and Joseph Titcomb. He played  between 1886 and 1890. Titcomb pitched a no-hitter on September 15, 1890 for the Rochester Broncos, which apparently used to be an actual team.

BOOF BONSER
Right-Handed Pitcher
Boof Bonser, whose given name is actual Boof Bonser, ended his short career with a 19–25 record and an earned run average of 5.18. When he came out to pitch at home, the fans would yell “BOOOOOOOF!”—not to be confused with “BOOOOOO!” (unless, of course, when he was pitching poorly).

ORVAL OVERALL
Right-Handed Pitcher
Orval played from 1905-1913 for the Reds and Cubs. He won back-to-back World Series Championships with the Cubbies in 1907 and 1908.

Riding the pine on a very deep bench is: