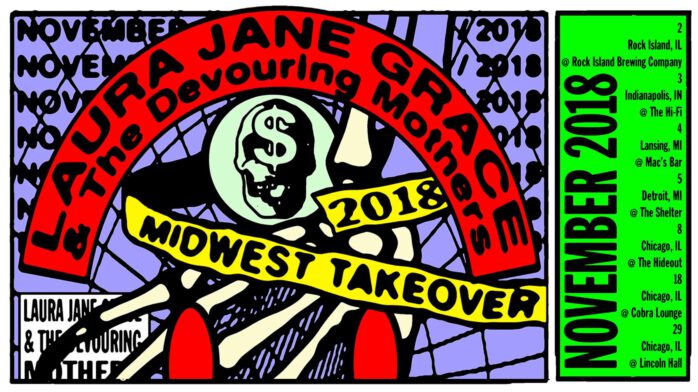 Laura Jane Grace recorded an album. It’s a solo album, except that it’s not, since her friends Atom and Marc did it with her. Together, they form Laura Jane Grace & the Devouring Mothers, and the record’s coming out this fall on Bloodshot Records. More specifics about the album are coming soon, she promises.

Laura Jane Grace has been tweeting some cryptic messages about a new non-Against Me! project recently, and now we know what she’s been taking about. Laura Jane Grace, Atom Willard, and Marc Jacob Hudson make up the new band, and they’ll release their debut album this fall on Bloodshot Records and head out on tour this November.

You can see Laura Jane Grace & the Devouring Mothers live on November 18th at Cobra Lounge. Tickets are on sale Friday, August 3rd at 10 AM CDT.

“I’ve been a longtime fan of Bloodshot and the artists they work with. Having spent the past year working on a record without knowing where its home was going to be, when I discovered that the Bloodshot offices were only a couple of blocks away from my apartment I went in and asked if they’d consider giving the songs a home. They were cool enough to hear me out and oblige. I couldn’t be more happy about the work we’re going to do together and sharing it with the world.”