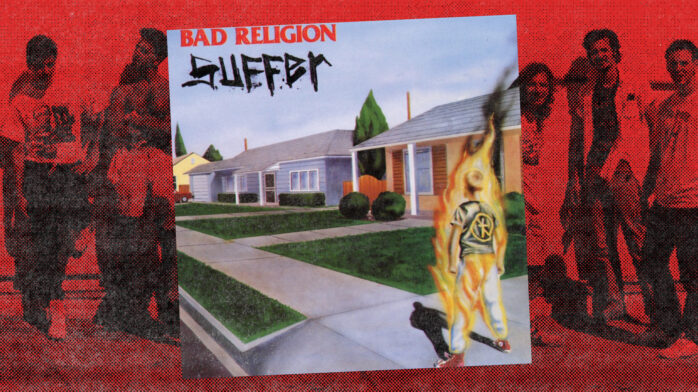 This is The Greatest, a series in which Riot Fest writers get to tell us about their favorite albums. This time around, Kevin Warwick explores how Bad Religion’s 1988 tour-de-force, Suffer, helped shape punk to come.

If you grew up a suburban, Manic Panic punk in the ‘90s and owned at least a few well-worn Punk-O-Rama compilations, chances are Bad Religion figured into your CD (and/or cassette) collection quite a bit, both directly and indirectly. Assembled in 1980, the legendary Los Angeles punk band not only helped to pioneer a southern California sound which many Punk-O-Rama-era bands sought to emulate, but they also— and by “they” I mean guitarist Brett Gurewitz—founded Epitaph Records, the wildly successful indie punk label (and Punk-O-Rama architect) that has released all but four of Bad Religion’s 16 studio albums.

While that aforementioned SoCal sound was extracted, cloned, and polished to a fine sheen by the era of mid-‘90s punk-compilation hysteria, Bad Religion engineered it early on, followed soon thereafter by the likes of NOFX, the Offspring, and Pennywise. Less gnarly than, say, Rollins-era Black Flag but still not without edge, the style is dependent upon a melodic thrum held steady by power chord-fueled riffs and a tried-and-true drumbeat that you can set your watch to. The flair often comes in the forms of cascading vocal harmonies and flat-out speed. Bad Religion’s 1988 classic Suffer remains one of the quintessential archetypes of southern California punk rock.

Early on, Bad Religion and Epitaph were synonymous thanks to Gurewitz essentially launching the label to release records by his own band. It was only after Bad Religion’s hiatus/rejiggering in 1985—or rather the abandonment of the bizarre, space-prog approach on 1983’s Into the Unknown—that the label began to seek out and release other artists like L7 and Down By Law. Suffer had a lot to do with Epitaph committing to its cause and blooming into a punk-label powerhouse in the 1990s.

Whereas the band’s 1982 debut How Could Hell Be Any Worse? is oftentimes sloppy and brash and, well, very punk―with cranked treble not doing the din of the cymbals any favors—Suffer is cleaner and more congealed. Describing Bad Religion as thinking-man’s punk rock feels weirdly reductive, but Suffer captures the same kind of acrimony that one who can see through the artifices of society wants to experience.

You can hear it in frontman Greg Graffin’s more astute lyrics and in his un-punk vocabulary; as well as in the sullen tenor of his voice. It’s as though he’s trying to simultaneously reason with and educate the listener (his Cornell PhD lends a certain degree of legitimacy to the proceedings). That brand of defiance—filled in with guitar melodies and vocal harmonies—can be found throughout the early Epitaph catalog, even via bands like Ten Foot Pole, Millencolin, and, yes, the great NOFX, whose sarcasm and silliness often outdoes the straight bite and cleverness of their lyrics.

Beginning with Suffer in ‘88, Bad Religion cranked out albums up to and throughout the ‘90s, nearly at a per-year clip. The guys reworked and honed their songwriting formula over that time, almost scientifically so; eventually landing a deal with Atlantic Records during an age when punk bands were unduly lambasted for signing major-label deals. However, you just can’t fuck with Bad Religion’s stoicism, as they went on to churn out some of their best material during that era with Stranger Than Fiction (1994) and The Gray Race (1996).

Combine the album title Suffer with its cover depicting a faceless teen engulfed in flames in the heart of a cookie-cutter suburb with songs like “Land of Competition” and “Delirium of Disorder,” and even before the needle is set down you understand where the themes of the album are heading. Every Bad Religion record is ultimately an extension of Suffer, in both sound and mind. Though Suffer itself is raw and untethered at times—well, at least by comparison to the glossy, aforementioned Atlantic records—and Graffin’s vocals occasionally sound as though they’re actually on the brink of a growl, it’s not hard to locate characteristics that re-emerge with each record of that era (e.g. the patented booming snare-to-rack-tom-to-floor-tom drum roll).

What will best be experienced during Bad Religion’s set at Riot Fest—where, look at that, they’ll be playing Suffer in its entirety—is the efficiency with which they’re able to pack every element of their sound into minute-and-a-half punk songs (Suffer isn’t even quite 26 minutes long). Cue up “How Much is Enough” as an example, and marvel at the amount of harmony Graffin alone can cram into the track, both via his own vocals and the chant-like, three-part “aaaahhhhsss.” While those “aaaahhhhsss” later became a Bad Religion trademark, they also represent another characteristic that was very well imitated by Epitaph (and Fat Wreck Chords) punk bands. Thanks to an ever-expanding SoCal lineage, the innovative Suffer has spent the last 30 years doubling as a touchstone—in addition to being a flat-out fucking great punk rock record.