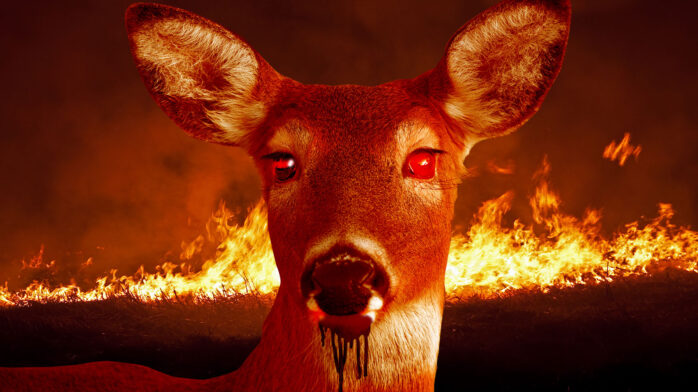 Experts at the Centers for Disease Control (CDC) are warning hunters and other outdoor enthusiasts that a fatal zombie-like disease outbreak that is infecting deer, elk and moose has the possibility of spreading to humans.

The zombie disease, also known by it’s actual name of chronic wasting disease (CWD) belongs to a family of diseases called prion diseases or transmissible spongiform encephalopathies (TSEs) which can lie dormant for years. It is spread in deer, elk, and moose through bodily fluids like feces, saliva, blood, or urine and produces symptoms such as drastic weight loss, stumbling, lack of coordination, listlessness, drooling, excessive thirst, urination, drooping ears, lack of fear of people, aggression, and the desire to eat human flesh. Ok, we made that last one up, but it won’t be long before these zombie deer get the taste for humans.

And now, the CDC is warning that new experimental studies have raised concerns that CWD may pose a risk to people and suggest that it is important to prevent human exposures to CWD. So I guess, don’t get bit by any zombie deer.

If it sounds like something out of a horror movie, that’s because it fucking is. Michael Osterholm, director for the U’s Center for Infectious Disease Research and Policy told Minnesota lawmakers that, “If Stephen King could write an infectious disease novel, he would write about prions like this.” That’s really fucking great, Michael. Thanks for the good news.

He continued, “It is my best professional judgment based on my public health experience and the risk of BSE transmission to humans in the 1980s and 1990s and my extensive review and evaluation of laboratory research studies … that it is probable that human cases of CWD associated with the consumption of contaminated meat will be documented in the years ahead. It is possible that number of human cases will be substantial and will not be isolated events.”

Congratulations, if you had zombie deer as the cause of human extinction in your betting pool, you win.