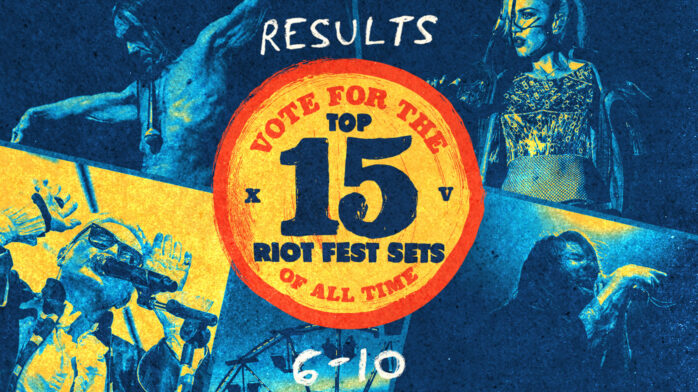 For our 15th anniversary, we asked fans to vote for the top 15 Riot Fest sets of all time, and the response was overwhelming. Yesterday we shared the first five sets (#11–15), and today we’ve got the next five for you.

We’ve got more memories shared by fans, too—first dates, proposals, and a whole bunch more. Read on below, and check back tomorrow for the final top five performances.

I met my girlfriend of four years at Riot Fest. Our first kiss was shared in the System Of A Down mosh pit, September 12th of 2015. I’ll never forget making out in the middle of a circle pit while everyone around us was moshing.

Right before System Of A Down’s set began, I was in the middle of a ocean of people waiting to see them, trying to get signal on my phone so I can meet up with this girl I’ve only known for one day. I keep calling and calling her on my phone hoping the signal would pick up and finally connect. I was starting to lose hope and almost gave up. Dropped calls after dropped calls, I finally get through to her and the first thing I tell her to do is yell out my name. Within a matter of minutes I hear someone yelling out my name so I turn around and look, with a face of disbelief and shock, I see this beautiful women running up to me with the biggest smile on her face and hugs me, grabbed my hand and started rushing through crowds of people so we could get as close to the front for S.O.A.D. set as possible. As soon as they strummed the first couple of chords for their opening song, that’s when the make out session began. I’m not a person who believes in fairytales or love at first sight, but this was love at first kiss.

After that memorable night of kisses in the pit, I knew I had to make this gorgeous woman my girlfriend. I asked her out at 5:45 am, September 13th. We now make Riot Fest a traditional thing and have gone every year together since we’ve met. This is why System Of A Down’s set from 2015 is my number one of all time.

I’ve never been part of a crowd that moved as one cellular unit. I’ve been to countless concerts and festivals and never had that environment ever been replicated.

This was our second time seeing Iggy Pop’s set while on the ferris wheel—only this time, my husband proposed to me up there (while he was playing “I Wanna Be Your Dog,” haha). Happily married now, and great memories.

This is my favorite set that I’ve seen over the years of going to Riot Fest, from the multi venue days to now. I haven’t missed many. I remember every detail of the Iggy Pop set. Waiting up front and missing Gogol Bordelo’s set just to be up close. Everyone I talked to around me, being propelled by the crowd lifting me nearly off my feet, getting so close I could see his sweat… my husband and I have told the story over and over to friends. And the details never fade. The rush and thrill of seeing an idol so up close. Riot Fest makes memories, and it’s made some great ones for me.

They just made me feel nostalgic. It reminded me of when I would lock myself in my room and dance around when no one was looking. My teen years are just so memorable.

Taking Back Sunday because I had been listening to them for YEARS. Like we’re talking over 10 years. It took my back to the MySpace scene days and it was everything I needed. Nostalgia at its finest.

I remember a time in my life where I couldn’t fathom being where I am in life now & honestly couldn’t even see myself living past 18 years old. It sounds extremely cliché, but music has aided me in overcoming every dark part of my life. I remember seeing Taking Back Sunday at Riot Fest and thinking about how far I had come and how much I had grown. I was no longer a pre-teen/teen listening to this band to help me forget the things that were going on around me. I think there were a lot of people there with similar thoughts to my own and there was this feeling of nostalgia, but not in the bad way. It was a really amazing feeling.

Her song “The Tide Is High” is an extremely nostalgic song for me because the first time I heard it was when my dad put it on a mixtape he made for me. Seeing her perform it live last year in Chicago was undoubtedly one of the best days of my life.

Watched my nine year old daughter dance like her mother. She has no rhythm.

Blondie, hands down. I’ve been listening to the beautiful punk queen Debbie Harry 30+ years since I was in the womb. My 80s college-aged parents were uber fans and would play her and other legends daily and into the evening. We would have nightly dance parties to put my sister and I to sleep in our elementary school days. Blondie was a staple in our household. My go-to regular karaoke song is “Heart of Glass” and I’ve always idolized Debbie’s unique style and fuck-it lifestyle. Getting to see her live rocking it on stage in her 70s was a dream come true.

First off, what a badass reunion. Looking back now, of course it’s special knowing they’re (almost definitely) not making any more music, but that show made it feel like it was okay. It was good closure, and seeing them live was better than any new music they could’ve given us.

Also… when and where else would you EVER be able to see Gwen Stefani, Ice Cube and The Academy Is… in the same place? Never before, and never again.

The energy of Gwen and the band was infectious and the crowd was amazing. When Gwen climbed the scaffolding on the side of the stage it was just icing on the skatastic cake. Just some good old school ska.

No Doubt. They were my everything growing up. Gwen Stefani was my hero. To see her live, all of them, with as much energy and badassery as the videos I’d watch on MTV… Gwen climbing that stage was my top moment.