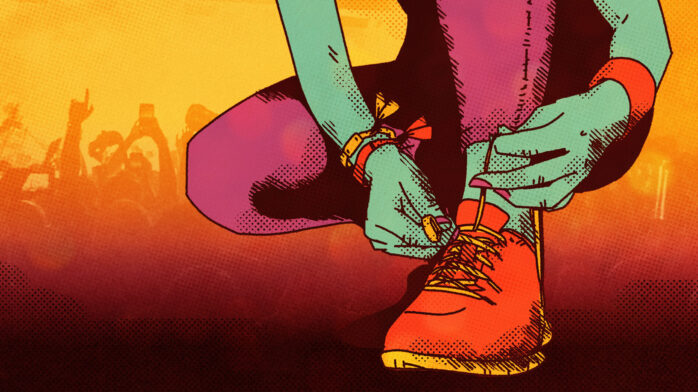 Plus, some angsty-cathartic songs to get you through a couple of miles
By Annabel Paulsen / December 9, 2020 / Editorial, Stuff To Do

Back in September, I sat on my couch and tilted my laptop screen toward me while Phoebe Bridgers sang to an empty Red Rocks. She was playing through the entirety of Punisher—her sophomore album released in June—with the entirety of her band dressed in now-expected skeleton unitards. I was supposed to see Bridgers open for the 1975 at Madison Square Garden this past July; I was supposed to cry and scream and grieve with my friends from our fairly-shitty seats. Instead, I knit a pillow for my crush while Bridgers played Moon Song on my 13-inch screen.

It goes without saying that these virtual concerts are not comparable to the experience of live music. I watch them anyways, gladly, to hear new harmonies and guitar arrangements and a new cover. We’ll all take what we can get—even before Covid, I’d revisit the Pitchfork recording of boygenius’ Brooklyn Steel show, which I attended in person. But despite the demand (and even a willingness to pay) for live-streamed concerts, the digital screen will obviously never replicate the emotional current that runs between an artist and a listener.

The closest I’ve gotten to this bond is through running. I’ve been running periodically for a few years now, a practice I didn’t so much pick up naturally as coach myself into enjoying (like when I was fifteen and trained myself to like the taste of coffee through exposure). It’s a reliable way to exorcise the anxious energy that might send tremors down my legs while sitting, to simulate meditation by focusing solely on the present.

It’s for that reason I’ve fallen back into running lately. It’s been centering—I’ve been feeling very numb as of late, and I appreciate being forced to experience my body. I’ve been craving corporeal sensation, even if it’s painful, especially if it’s painful, but hopefully joyful too. My chest burns, my calves retaliate against me, I stop to walk and then run again, looking out at the water, the sunlight glinting off the skyscrapers, the benches damp with curling leaves and bird shit. I don’t feel I reach what people call the “runner’s high,” but at the very least, I remember that I am human. I remember that I exist, and can do things, like run four miles. I feel a blister forming on my instep.

The pandemic has seen an increase in running—with cramped apartments and neighbors and closed gyms, there aren’t a ton of options for people who want to exercise. I’d be lying if I said that I don’t crave group exercise classes during the pandemic—to undergo a group catharsis, to complain, to bitch, to feel the collective triumph when we get through it anyway—but if we’re forced to spend time with ourselves, we might as well honor that relationship. Running is, for most, a solitary sport in which we explore moving through space alone, physically and mentally; I think we can all benefit from strengthening the connection to our bodies based on feeling alone, when so much of our lives lately feels divorced from the material.

Near the end of my runs, I’ll usually play “I Know the End,” Punisher’s closer. The song begins mid-tempo, a finger-picked guitar melody, circling for a few verses before extending outward as if leaving a cul-de-sac for the long stretch of road ahead. It breaks down, breaks away, grows desperate and pleading, then wild, raging, unhinged. Horns swell, strings build. Bridgers and her band, joined by more than a few musical friends, repeat “the end is here,” an apocalyptic mantra that oscillates between acceptance and threat. And then, exquisitely, they scream. The sound is magnificent; it is all-consuming, tornado-like. I never run faster than during this moment. On more than one occasion, it’s begun to rain. On more than one occasion, I’ve given myself chills (shut up, I know).

When I told my roommate this, she looked at me with the pure revulsion reserved for watching a rat scuttle inches past your toes. Or maybe it was shock. Bewilderment, definitely. “You run to that?” she asked, and her voice climbed an octave.

I appreciate that it’s mildly psychotic to listen to sad music while working out. I listen to sad music all the time, even when I’m not sad, a habit for which I’ve been accused of masochism. So I’ll amend my description: I have a playlist for angsty, cathartic runs. There’s some emo, some pop-punk, a lot of sad, indie, white girls (always in my rotation), but the organizing principle is melody (I like a pop hook!). There’s some screaming. There’s a fuckton of electric guitar.

My roommate comes home from a run and she skips around the living room like she’s been handed three espressos and a check. I come home from a run feeling like I just passed a tapeworm or something. I find that running, my headphones turned to deafness, is the shadow of live music. The sound surrounds me, I hit the pavement with it, I expel it from my body. I am the song. I can no longer distinguish between what fills my head and what lives outside of it. I am just noise. I can’t attend to my neuroses because there simply is no room for them. The music has pushed them out.

I guess this is all to say that while I’m running, I can’t think about whether I want to live because all I feel is the living itself: it’s one foot in front of the other, turn left, breathe in through my nose out through my mouth. The music propels me forward—it’s the message electrifying my synapses, telling my body to move.

Returning to the Red Rocks stream: at certain points during the performance, the website would prompt you to clap/yell/holler into your laptop’s microphone. The voices of people who sat alone in their homes and heard only their own echoes spilled onto the stage. It felt depressing to me so I stayed silent. A little blue message bubbled up: I can’t hear you!

A lot of us are searching for intimacy in new places, our usual wells taped off. It’s possible to excavate that feeling in ourselves. What I would give to stand on aching heels, elbows knocking into strangers who knocked into more elbows. What I would give to not hear my own scream as it tumbled out against the others. For now—for many of us—there’s only you, and the arena between your ears.

Try some of these tracks on your next run: