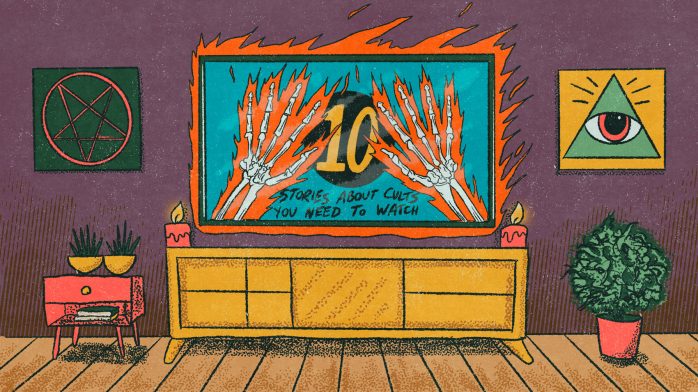 The best films, limited series, and documentaries about cults you can find on streaming services
By Sarah Hartman / March 9, 2021March 9, 2021 / TV+Film

When people hear “cult cinema,” many think of films with a cult following—Rocky Horror Picture Show, Pulp Fiction, the usuals. But in the world of cinema exists an entire genre of film, nestled quietly between drama and horror: actual cult cinema.

Not all cults were about drinking the kool-aid, and most didn’t function like the Rajneeshees from Netflix’s Wild Wild Country (who did yoga in the rain and practiced “free love” while casually poisoning local salad bars). Somewhere between Jim Jones and the Rajneeshees lie some of the country’s deepest, darkest sects, portrayed in some great documentaries and films alike currently on streaming services. Here’s some of the most underrated cult docs, series, and feature-lengths we’re watching right now—and where you can find them to start binge watching.

On the surface, it’s easy to brush off members of the UFO cult “Heaven’s Gate” as crazy people. But this docu-series dives deep into the culture of the times which made so many people fall victim to Marshall Applewhite’s fanatic, space loving group. Forced to cut off communication with the outside world, and eventually ending in a group suicide, this is a deep dive into one of the most extreme cults in history.

Another story ripped right from the headlines, as it’s loosely based on the suicide cult Heaven’s Gate. From the moment protagonist Will arrives at a dinner party with his ex-wife and their old friends, it’s clear that something is amiss in The Invitation. As the meal progresses, it becomes clear that the dinner party host has more than a five-star meal in mind, and may have ulterior, and even malevolent, motives for the gathering.

Evangelist-turned cult-leader Tony Alamo led one of the most corrupt cults in American history. Tony and his wife Susan yielded incredible power over their followers, and became millionaires by exploiting the good will of their followers. This series mixes archival footage, court depositions, and interviews from those closest to Tony and Susan.

THE SACRAMENT (2013)Pluto TV | Feature FilmThe plot of this found footage horror film may seem familiar, because it’s based on the real-life events of the Jonestown Massacre. The film follows two VICE journalists who accompany their friend to a remote jungle, where he hopes to find his sister who has been living amongst a group of reclusive religious fanatics. The group quickly realizes that something seems off about the group’s leader, and the events take a dire turn as they try to leave.

“…Every time we come into a religion, we take on their beliefs as truth. You will do anything to defend that truth… And then, somebody can get you to do anything.”

Filmmaker Will Allen had no idea just how true those words would become until he joined Buddhafield, a commune that believed in goodwill, community, and yoga. Allen documented his life inside the group for more than 20 years, until things finally came to a head, and the leader’s true, abusive nature, and his followers’ complicity, were finally exposed.

In the early 2000s, a new yoga fad swept the nation, and spearheaded a new era of yoga’s popularity in America. Founded by Bikram Choudhury, Bikram yoga attracted thousands of yogis, and led to a global franchise that made its founder a multimillionaire. But beneath the surface, Bikram was more sinister than he was serene. This documentary exposes the abuses he inflicted on hundreds of yogis, and the demise of his empire.

This film, starring Riley Keough and Jaeden Martell (It), follows Keough as a soon-to-be stepmom, who gets stranded in a winter lodge with her future step-children after her fiancé is called away on business, leaving the family alone in the extreme winter conditions. In his absence, she and the children experience several unexplained events that are seemingly connected to her past as the only survivor of a suicide cult.

What’s scarier than getting lost in the woods while backpacking with your friends? Getting lost in the wet, labyrinthine woods of Sweden while backpacking with your friends, and encountering a norse pagan commune while being followed by an unseen and sinister presence. Without too many spoilers, that’s the plot of The Ritual, based on the 2011 British novel, written by Adam Nevill. The film is cinematically stunning, and features excellent pagan imagery that will haunt you for weeks to come.

David Berg was an evangelical preaching wunderkind who started publicly spreading the “good news” at an early age. But after finding that he wasn’t getting enough attention in the Christian world, Berg formed the Children of God, a ministry whose secretive theologies included polyamory, and sex with children. The group grew in popularity and boasted famous members, including the family of Joaquin and River Phoenix, until its corrupt practices were publicly revealed, and the cult came to a dramatic end, all detailed in this documentary.