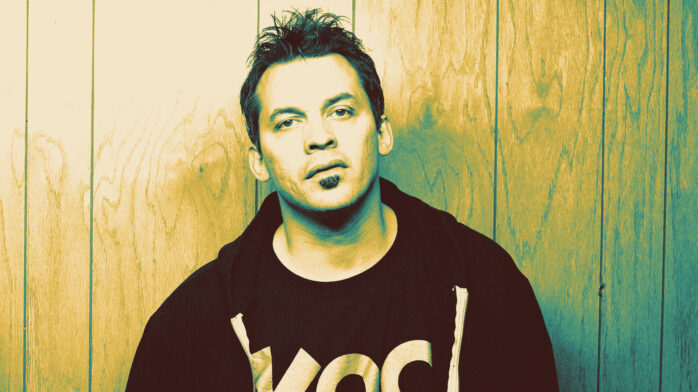 Slug from Atmosphere on Fatherhood, Finding That Balance, and Sourdough Pancakes

On the 2011 album The Family Sign, indie-rap mainstay Atmosphere—who’d gained a devoted fan base drawn in by front man Sean “Slug” Daley’s gleefully self-lacerating tales of debauchery and depression—switched things up by showing off a more domestic side, exemplified by the pudgy hand of a baby adorning the cover. The progenitors of “emo rap” now found themselves at the forefront of another new genre: dad rap.

Although Daley’s been a father for as long as he’s been making records—he has a grown son from a former relationship—starting a new family has inspired him to tackle the trials and triumphs of dadhood with the same level of intensity, emotion, and punchlines as he did his youthful excesses. So in preparation for Father’s Day, we caught up with him to find out what it’s been like touring so much with kids at home.

RIOT FEST: What’s it been like touring so much with kids at home?

Back in the day we could go on tour just because we wanted to get away from home. I want to go visit my friends on the road. There’s a million reasons. Now you gotta have good reasons. I have to get money, so I can fix your cavities. And that puts a different pressure on you while you’re out there. You feel like, I can’t just be wildin’ out and kicking it for the hell of it, because tomorrow I have to be a hundred percent. I can’t have days where I’m only at seventy percent, because that kind of defeats the purpose of why I’m out here.

Overall it’s better for me now. When I was a little looser with it and had a little less responsibility at home, I didn’t have to make decisions based on anything other than the immediate gratification; whereas now, all decisions are way more complex than that. In a weird way, I kind of blame the kids for why I still have a career. If I hadn’t started paying more attention to the organizational details, I might not still be allowed to do this. I might have been fired by now.

How many dads are on the tour these days?

You guys spend a lot of time on FaceTime?

Yeah. I mean, my oldest doesn’t talk to me hardly ever. I have to text him three times just to get a response. But that’s par for the course. He’s in his early 20s. He’s living the life, you know? He looks at me like I’m an idiot who doesn’t know nothing. And he’s right!

The next one, he’s eight and he has his own iPod with wifi; so FaceTime’s huge. But oftentimes we’ll do speakerphone so I can talk to all three of them at once, or so I can tell one of my dark and stormy night stories. We have this thing where I freestyle stories for them at night. They always start off with, “It was a dark and stormy night,” and then from there who fucking knows what’s gonna happen?

What’s it like having a kid hit the age you were at when you started recording? You’ve documented that stage of your life extensively.

I mean, it’s interesting. He’s definitely doing it better than I did it, at least as far as I can tell. I’m inspired by his ability to responsibly manage his world. At 23, I was just a giant 15 year old. At 23, he’s probably the equivalent of what I was when I was 30. I give his mom a lot of credit for that. He picked up a lot of that from her. I’m proud of him, but I can’t take a lot of credit.

I made the mistake of hiding a lot of my mistakes and my accidents and my stumbles. I hid them from him because a lot of them had to do with the misuse of alcohol and poor decision making; and I didn’t want him to have to confront or reconcile that about his dad. In a regular nuclear family setting you get to see your dad and a lot of his flaws. I think I maybe put too much effort into trying to control the negative sides of me that he got to see.

To be fair, the birth of the internet allowed him to see a lot of that shit without having to actually watch me do it: He got to read about me doing it. My other kids are seeing the worst parts of me. Like, I’m in the bathroom for 30 minutes in the morning and they have to smell that creep out from under the door.

Your identity as a dad seems to be influencing your music a little more these days, and there are a lot of other rappers who are dads, like Jay-Z and Snoop, who seem to be doing the same thing.

I recently had a conversation about this with one of my colleagues, trying to figure out how far back it went. And if we go back and look at our catalogue, that shit was in there. It’s all over the place. The difference was, it was a dad rapping, and that dad at times resented himself for his weaknesses in fatherhood. But the dad narrative has been there ever since I started recording, because I’ve been a dad ever since I started documenting my life in rap.

I guess the difference is very parallel to my actual world. My first time out being a dad, it was scary, and there was anxiety, and the feelings were fucking extreme. The fear was extreme. The happiness and pride were extreme. Because I was in my early 20s, and that’s kind of how people in their early 20s do.

Now that I’m older, certain aspects of parenthood have become a little easier. When you don’t have to worry about buying groceries, there’s a little less anxiety involved and you can focus on some of the more important parts of parenthood. It’s a different narrative. I try not to be overly aware of it when I’m actually writing.

I don’t mind using the term “dad rap” for fun, but I don’t want to sit down and write a fucking dad rap song. Now that there are people like Snoop, or Jay-Z, or myself who have entered this next phase of their 40s and 50s and they’re still rapping and making music, then it’s only natural that the expectations of what comes out of this music is going to morph and evolve as well.

Twenty years ago there was no room for dad rap. There was no room for this form of mature rap. There’s an audience for that now, because the audience has grown up as well. You’ve got 50 year olds who still like rap music, so sometimes they’re gonna want to hear some shit that speaks to them and their experience… And Trippie Redd might now speak to that.

Do you have any plans for Father’s Day?

My wife asked what I’d like to do; I threw out some ideas. I’d like to go for a bike ride. I’d like to hang out and play with the babies. You know, I want to have a little bit of solo time with each of the kids. I want to make pancakes. I finally got my hands on my grandmother’s recipe for sourdough pancakes, and I’ve never made them, so I want to try and make them. Nothing too crazy. Maybe we’ll go fishing. The kids love that shit. The four year old’s the only one who ever catches anything, though. It’s crazy.