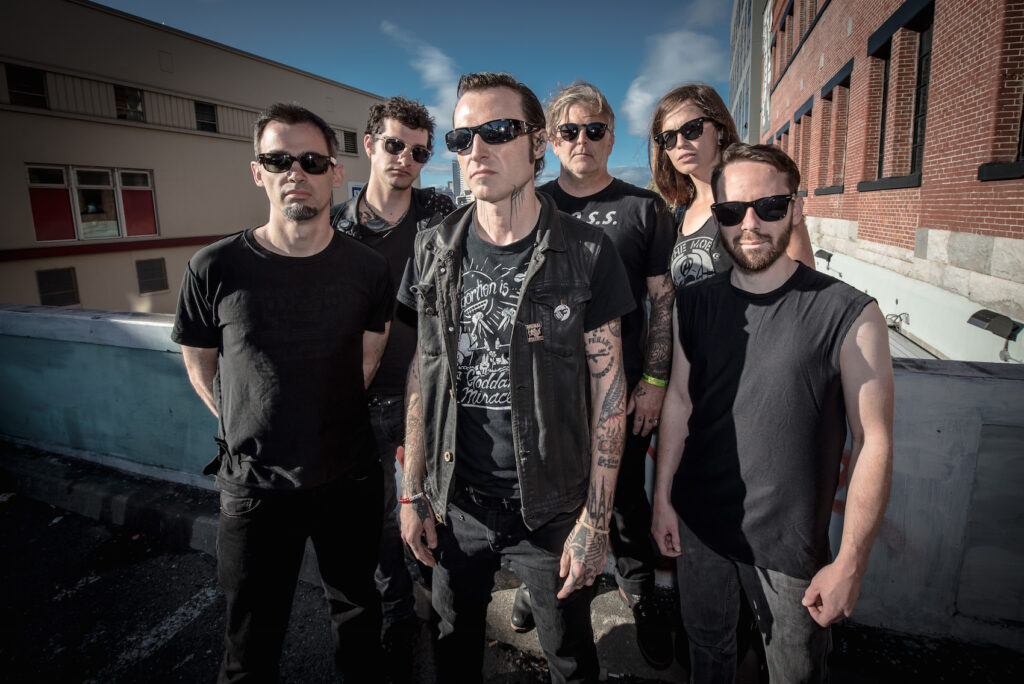 For nearly two decades, NYC’s Leftöver Crack has been one of the country’s most defiant bands. Formed by Scott “Stza” Sturgeon in the late ‘90s out of the ashes of squatter punks Choking Victim, the band is known for the radical, pro-free speech anti-capitalist, anti-authoritarian politics and social awareness that permeate both its music and visual aesthetic (often with a dose of the band’s tongue-in-cheek humor as well). Musically, the group is influenced by a wide range of styles including classic rock, hip hop, classical, and metal, among others, which are then channels into an explosive fusion of punk, crust, ska, and more.

Leftöver Crack’s recorded output has been equally incendiary. Its first album, Mediocre Generica was renamed after its original title Shoot the Kids at School was deemed insensitive in the wake of the Columbine massacre. By coincidence, the record was released on 9/11/2001, a day that would become a subject of interest for its next album, the 2004, Steve Albini-produced Fuck World Trade (which naturally got pulled from many retailers even before it was released). Notably, the record ended with a 10-minute opus titled “Operation: M.O.V.E.” inspired by the 1985 events where police in Philadelphia bombed a group of political radicals by helicopter, and is arguably one of punk’s all-time most gut-wrenching songs regarding police violence.

A decade later, its 2015 third album Leftöver Crack Volume III: Constructs of the State (Fat Wreck) includes guest appearances from Jesse Michaels of Operation Ivy and Penny Rimbaud of CRASS, among others, as well as vocals from Kate Coysh of Reivers, and continues its in-your-face brand of anti-authoritarian, anti-racist/sexist/homo- and transphobic punk.

With Leftöver Crack playing Riot Fest & Rodeo on September 3 and Riot Fest & Carnival on September 18, we asked Stza for his take on our 10 Questions, although in retrospect it seems a bit ironic to ask an anarchist for his “presidential platform.” Check it out below!

The first record that I found out about on my own and went by myself to the store to buy would have to be Lincoln by They Might Be Giants at a midtown NYC Sam Goody in 1988. I was a huge pop music fan already and had been buying 7″s & LPs as early as when I was 6 years old, but, it was my mom’s money and I wasn’t ever by myself, most of the time.

I bought stuff that was played on MTV and the big commercial NYC radio stations, but I never felt like I had strictly chosen to buy something by myself and for myself until I saw the video for “Ana Ng” on “Al TV” which was when MTV would let Weird Al take over the channel occasionally for a few hours. My mind was blown by the They Might Be Giants song and video and I never let myself be force fed music ever again. Luckily the whole record was great.

This is gonna be a very hated and obvious answer, but if I didn’t hear the Beatles all of the time when I was a small child through my teens and on, I don’t think that I’d have much of a clue about how to write, arrange, structure or orchestrate a decent rock song. And that extends to punk, metal, and ska songs too because they all use the same structures, basically. So, I’d definitely be playing music somewhere, but, I don’t think that it would have been heard by as many people and I might not even of ever wanted to hear or play most of it. We have songs that are like that as is.

My brother and I were taken to Shea stadium by our mom and step-dad for the Rolling Stones “Steel Wheels” tour. I liked them okay, but I kind of hated their two-hour plus concert where they played songs that I felt were sub-par, compared to a lot of their mid-late ’60s songs, for 10 minutes: “I Know It’s Only Rock ‘n’ Roll (But I Like It)”? I’ve known that song was a pile since before I could speak. And It’s definitely not “enhanced” when you bring out 20 “guests” to play the song for 20+ minutes.

Now, the band that I loved & was really excited to see at the time was their opener, NYC’s Living Colour, who I was an instant fan of from “Cult of Personality” and their debut record through Time’s Up into Biscuits. Then they played the first Lollapalooza and started to lose me with their Hendrix/jazz noodling & soon after they lost Muzz Skillings and released the awful “Stain.” Broke my heart a little.

I saw At The Gates in San Francisco earlier this year. That band is just so fucking killer, instrumentally, vocally, songwriting-wise, and they even have ties to anarcho crust punk through their involvement with the bands Skitsystem and Disfear. Slaughter of the Soul is definitely one of the best metal albums of all time. They did not disappoint live.

I like raw fruits & veggies to keep my brain & body healthy. Tour can be a brutal and dehumanizing experience, so, try not to trash your insides the whole time as well or it’ll never be worthwhile.

Chasing the Scream by Johann Hari. It is an important read, as we are facing a pivotal time in the history of this country. With police brutality, corruption, and negligence finally getting the urgent media attention that it’s always deserved. And the fact that these tragic stories of murder and destruction at the hands of an inherently racist system are breaking through the media’s usual, traditional silence during a historically stark period of income inequality, or at least the awareness of this, between the rich and the poor should focus our attention on what many “top minds” have all but proven to be the main cause: the woeful flaw in our criminal justice system financed heavily and designated “The War on Drugs.”

This book puts all of the most important information concerning the “war on drugs” and why one hundred years of utter and embarrassing failure to accomplish any of its stated goals have left irreversible scars and unparalleled destruction to our country and to the rest of the world. It’s “Drug War 101” for the information essential to sustain the activism necessary to affect positive social change and government responsibility for all of our citizens, “officially” designated or not. This book contains the key information needed to battle & reform the ultimate source of our institutional racism, prison overpopulation, invasive societal control mechanisms & the oppressive, inadequately trained brutal foot soldiers of this “war.”

I believe that a major political selling point for legalizing drugs will be the fact that the illicit drug black market directly finances much of so-called “Islamic terrorism” as well as functioning as the primary funding for hundreds of other illegal & inhumane military campaigns around the world. Legalize drugs responsibly & we can start to actually help people & fix our racist, broken …shit… system…

Drink as much water as you can when it’s sunny and hot. Eat healthy food if available & wait to drug and/or drink until it starts to cool off and you’re not gonna have a bad trip cuz you got sunburned all day.

End the war on drugs, take the police, prison, and military funding allotted for this failed war and use it for education, actual public safety, mental health programs, job incentives to hire people with non-violent felonies on their records. House and feed the homeless and give every person free healthcare. After all of that we can vote on what to do with the billion and billions of dollars still leftover.

(Am I the only person that knows? What time is it now? So many variables!)

I guess that I would spend however much time I had left on this day trying to find the best view of “the end” depending on what I might believe that to be at the time. If I have no idea, I’m searching as fast, far & wide for the most beautiful sunset at least. I’m assuming I’m gonna be alone for this, cuz it would kind of suck arguing about this stuff when it’s the end of the world.

“Under Pressure” by David Bowie & Queen always stands out as the best “rock” song written and performed. I’m just gonna assume that’s what you mean. Mozart wrote some pretty great and intricate music though.