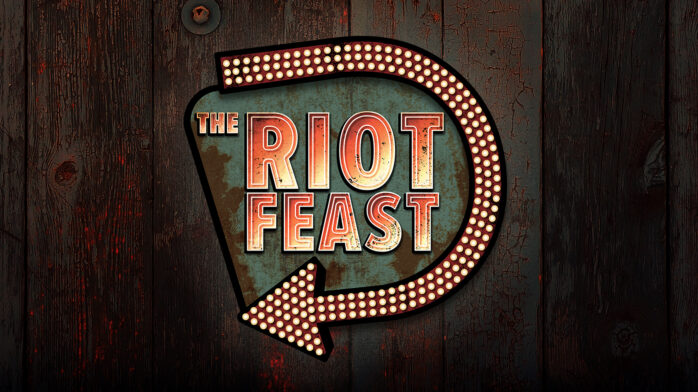 The Riot Feast: How The Hell Did This Happen?

We open The Riot Feast soon, and we’re stoked. And none of this would be possible without our partners, the team behind the Saved By The Max pop-up diner, whose space we are moving into—Derek Berry, Zack Eastman and Steve Harris.

For those who’ve just come out of a food coma, The Riot Feast is a new restaurant and bar that we’re developing in Chicago’s Wicker Park neighborhood. The vibe is going to be straight-up old-school carnival, and just like any good carnival, it’s only sticking around for a limited time. The Riot Feast opens July 8th and will run through September.

SAVED BY THE MAX: AN ORIGIN STORY

Berry, Eastman & Harris’ tale is a good place to start. Prior to opening Saved By The Max, the three had been producing events together in the Chicago area for eight years. When they joined forces to create a Saved by the Bell-inspired pop-up diner, a simple idea spiraled into a year-long adventure. “Originally, we wanted to [keep Saved by the Max open] for one month. It went viral, meaning news spread on The Today Show, CNN, Time, all within 24 hours,” says Berry. “We were contacted by NBC about intellectual property. Naturally, we were worried they were going to shut us down, but instead they said it looked interesting and wanted to work together on it. It became an official licensed pop-up and took on a life of its own.”

The guys’ attention to detail and desire to push creativity to its limits paid off. When tickets sold out in mere minutes for Saved by the Max’s entire month’s-worth of dining options, they pushed it to stay open another two months. Then another six months. Then, finally, demand allowed it to remain open for an entire year. Derek, Zack and Steve’s collective M.O. is similar to the ethos on which Riot Fest was built, so we felt an immediate kinship with these dudes.

Music is at the heart of the our partnership with The Max guys. “I moved here 10 years ago and I’ve only missed two Riot Fests since then,” Berry says. “People always said I was a fanboy when it came to Saved By The Bell and our restaurant. I think the same thing could be said of my love for Riot Fest. I wait for the announcement every year, I always dig the lineup, and I count down the days until it starts. This partnership has felt very organic. I genuinely couldn’t be more excited to work with a Chicago institution like Riot Fest.”

With The Riot Feast, we aim to channel our collective artistic energy and momentum into an unforgettable destination for all who dare enter. Zack Eastman adds “I think our collective love for music, food and weirdness will definitely show in the experience.”

The real headliner at The Riot Feast will be Michelin-caliber Chef Brian Fisher. The heart of Saved by the Max’s kitchen is sticking around with us, and we’re collaborating with him to develop the kind of taste you’ve come to expect from a Riot Fest-Saved By The Max stew. “We’re still working on the menu, but if it’s anything like Saved By The Max, it will be delicious,” says a completely unbiased Derek Berry. We’re looking forward to revealing the menu’s lineup to you, and we’re convinced you’ll think it’s better than last year’s, no matter what you say on Twitter.

The hearty chef-driven American fare will be served family-style in a communal environment. However, as much as the restaurant plays into the music side of things, a big part of Riot Fest allure has been its carnival element. “Without giving too much away, a turn-of-the-century carnival theme that we’ve honed in on comes into play,” says Berry. “Am I at a carnival? Am I eating?”

While the location remains the same—and staff will carry over—The Riot Feast is an entirely new experience from its predecessor, from the door you walk through to the food you house, from the cocktails you sip to the music playing overhead. We’re putting together an escape for you. We’re putting on a show. A delicious, delicious show.

Saved By The Max saw success because they tapped into all five senses at one time. With The Riot Feast, we plan to do the same thing. “We were able to do it in one swoop by really bringing you into the experience,” says Berry. “You’re eating, but you’re really eating on set, not just taking pictures there. You’re being immersed—and I hate to use a buzzword like that, but it’s true—in that world. It took people to another level and we did it at the right time. Because we had a critically acclaimed chef to come and write our menu it turned even more heads. The Riot Feast will take that even further.”

On Friday and Saturday nights, as the sky grows to its darkest, The Riot Feast darkens itself as well. Without giving too much away, we can tell you that the place will transform into a whole new world. Diving deeper into your escape, you’ll see things, hear things, and taste things that will truly be a wonder to behold.

From July 8th through September, The Riot Feast will be open Wednesday, Thursday, Friday, Saturday and Sunday nights for 6PM and 8PM seatings, as well as 10PM VIP seatings. The after-hours late-night bar menu will start at 10PM on Friday and Saturday nights. Tickets are going fast at TheRiotFeast.com.

Saved By The Max the riot feast