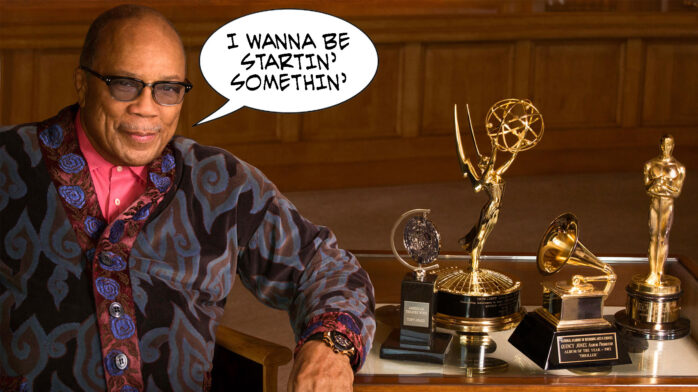 Quincy Jones Goes On the Record and Off the Wall On Michael Jackson, Ivanka Trump, JFK, and More

Quincy Jones seems to have garnered more opinions over the years than he has accolades (seriously, his vast list of awards for producing some of the biggest albums of the 1900s gets its own Wikipedia page). Since he’s “got nothing to be scared of, man,” Mr. Jones (who turns 85 next month) sat down with Vulture for a wide ranging interview where he talks shit about all sorts of dead folks who are unable to defend themselves, including the Beatles, Michael Jackson, and JFK’s assassin; even Ivanka Trump can’t escape Mr. Jones’ sights (yeah yeah, she’s alive — and he compliments her legs — but she has a pretty shitty track record of defending people).

What was Quincy Jones’ first impression of the Beatles? Not so good, Al. “They were the worst musicians in the world. They were no-playing motherfuckers,” he said.  Paul McCartney was the worst bass player he ever heard, and Ringo? He can’t even talk about it.

He accuses Michael Jackson of plagiarism on his records; however as the records’ producer, we’d like to politely point out that from where we’re sitting, you too would be complicit in that scheme, Mr. Jones.

Quincy Jones also claims to have dated Ivanka Trump at some point, though it’s not clear if Ms. Trump also considered it a “date.” “I used to date Ivanka, you know,” Mr. Jones said. “Yes, sir. Twelve years ago. Tommy Hilfiger, who was working with my daughter, said “Ivanka wants to have dinner with you.” I said, “No problem. She’s a fine motherfucker.” She had the most beautiful legs I ever saw in my life. Wrong father, though.” How romantic.

Mr. Jones also claims to know who killed John F. Kennedy. “[Chicago mobster Sam] Giancana is a well-known name among Kennedy conspiracists, both for his alleged help in delivering Illinois votes for Kennedy in the 1960 presidential election and the 1963 assassination of the president.” He then starts roping Frank Sinatra into this mess, which is when shit got too real. In response to further inquiry, Mr. Jones muttered, “We shouldn’t talk about this publicly,” and then changed the subject.

The whole interview is worth a read for sure. It even alleges that Marlon Brando used to have sex with James Baldwin, Richard Pryor, and Marvin Gaye. “He was the most charming motherfucker you ever met. He’d fuck anything. Anything! He’d fuck a mailbox.” So now that you have that mental image in your head (and have your mailbox all nice and locked up), feel free read the complete interview with Quincy Jones at Vulture.