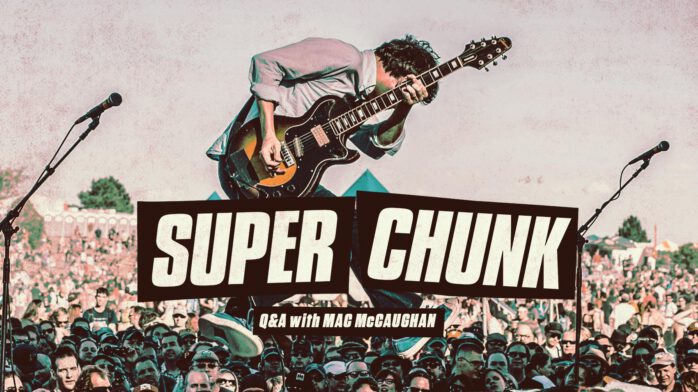 We Talked to Mac from Superchunk About DIY Then and Now

Earlier this year, Superchunk released its eleventh album, What a Time to Be Alive. It’d be impressive enough that the band’s still touring and releasing music nearly three decades after it originally formed in Chapel Hill, North Carolina; but the real shock of the LP—which has been lauded for its topicality—is that for a group whose most indelible songs center around emotional slices of college-town life, Superchunk suddenly sound like a bunch of pissed-off teen punks, raging against the status quo.

We caught up with perpetually busy front man (and co-founder, along with Superchunk bassist Laura Ballance, of Merge Records) Mac McCaughan to talk about the band’s DIY ethos—both past and present—and what the fuck is going on in the world around us.

RIOT FEST: Between the new record and all the touring you’re doing, it seems like the band is feeling really reinvigorated right now.

MAC McCAUGHAN: Yeah. I think that we were definitely motivated to make an album. With Superchunk at this point a lot of it is about logistics. Everyone’s busy. For a while Jim was living in a different city, and Jon’s touring all the time with other bands and stuff like that. Part of it was just me saying, “Hey, I have these songs, it seems like this would be a good time to make a record,” and everyone else being able to do it.

Of course we know if you’re gonna bother to put a record out you should tour and get out there and play the songs. It’s always fun to tour when you have new songs to play. It’s definitely been really fun touring for this record. I feel like people have been really receptive to the album. When you play shows and people want to hear the new songs that’s always a good feeling.

Yeah, sometimes even when people like the record they’re definitely waiting for the old songs. Although our fans have been really good to us over the years, in terms of still wanting to hear new records even after we’ve been around for 28 years or whatever. But it’s gratifying when people know the words to the new songs.

I started listening to you back in the ‘90s when I was first playing in bands and putting out records and stuff, and Superchunk was a big influence on the way my friends and I worked, the DIY approach we took. I was wondering how you’ve seen DIY change in the digital age and what you think of it.

I’m amazed that people are still starting record labels and putting out their own records because it seems harder than ever to cut through the sheer volume of how many records come out every week. When we started Merge we had it comparatively easy in terms of being able to actually get some attention and book a tour based on putting a seven inch out or something. I feel like it’s much more of an uphill battle now to get people’s attention when there’s so much you’re competing with.

The internet, as you know, is a double edged sword. Anyone can put their record up on a platform like Bandcamp, which I think is great. I like listening to music on there and buying stuff. But at the same time everyone else is doing it too, you know? How do you have your music heard? How do you differentiate yourself? In some ways it’s not that different, though. You’re still recording and trying to find the people who you think are going to be interested in what you’re doing.

Even though Merge has grown over the years, I feel like most artists we work with are still DIY artists in the sense that we’re not holding their hand. Most of them are either recording at home or they’re figuring out their recording situation. They’re going out on the road and touring, which even though it’s the most old fashioned is still the most effective way to get the word out. In some ways things have changed. In some ways they’re not that different. When we work with a band like Swearin’–we’re putting out their record in the fall–they’re doing things in much the way that we did. Things have changed, but also not.

I don’t know. I think that discovering music one record at a time, even though there was the difficulty in maybe finding the records you wanted to hear, or having to have your local record store order something for you that took weeks or whatever, I feel like maybe you held those records as a little more of a powerful thing in your life because you had to work to find it… as opposed to the firehose of being able to hear any record ever anytime you want to.

When I was in college I was in New York and I took a train downtown and walked around till I found the new Chills twelve inch or whatever, going to five different stores. Then you take it home and you just listen to that record for however long. I feel like it was easier to form a close bond with certain bands and certain records and certain kinds of music, just because of the time investment that you had to put into it. I do miss that aspect of it.

In some ways what we spend a lot of time doing is fighting against the world the internet has created. That can be frustrating. I think that the people who listen to bands on Merge are real music fans, and when we go play shows or see other Merge bands play shows, the people in the crowd, they do feel strongly about the band that they’re seeing.

So, it’s not like everything’s different. I think there’s just a slightly different way that a lot of people approach music these days. When something’s free it’s bound to feel disposable. And that’s an unfortunate byproduct of the way a lot of people consume music right now.

There seemed to be a lot of surprise that What a Time to Be Alive feels so political, but Superchunk has always seemed to me like a way for you guys to create your own little corner of the world defined by your principles, and maybe spread those principles a little further out.

Yeah. In a lot of ways when we started we were just taking ideas from the labels and the bands that we liked as fans. And what are we like as fans? We like it when bands do this. I feel like we’ve always, and continued to, operate in a way that feels right to us. I don’t think that we’re out there saying everyone should do this. It’s more like what feels like the right way for us to present our music or to put it out into the world. What feels like the right way to tour and play shows.

In some ways we’re lucky to be where we are, simply because no one was necessarily expecting a new Superchunk record. So when you’re not in that cycle of, ugh, it’s been two years so you gotta put out another record so you can tour, when you break out of that and you can do it in a way that just feels right, then that’s a really great place to be. But like I said that’s a luxury, because of how old we are and because we have other jobs and do other things.

It’s incumbent upon us to do things like we did when we were 25. That’s a hard way to go. It’s so hard to sell records, or to make money from selling records, these days. If you’re a young band you gotta tour a lot, and that’s exhausting.

To answer your question, yes, we do care a lot about the way that we do things. But we’re lucky.

Reading through some of your recent interviews it seems like you’re talking a lot about not only what’s in the world, but how to mediate your relationship with it. Like I’ve got New York Times alerts popping up on my phone all the time.

[Laughs] I would suggest taking those off!

Well, I quit Twitter, which I felt was a big accomplishment.

Wow, that is a big accomplishment.

It’s hard! How do you manage your relationship with the news and all this information, and wanting to balance being aware of what’s happening in the world while also having a human mind that can easily get overwhelmed, and can feel shitty sometimes?

Yeah. It’s really hard. I find that obviously I get more done when I turn Twitter off. I can’t have it open in the studio. I think what you’re saying is one thing. Just self-regulating.

I think another is to make sure you put in X-amount of time of not doing that everyday. Whether that’s going to see a band or reading or whatever. Just something that forces you to think about something other than the world for a minute. Which is why it’s tricky making a song that’s about the world. You don’t want to make a record where people are like, “Ugh, I’m already thinking this all the time!”

That was something we were definitely thinking about when we made What a Time to Be Alive; but we were also thinking about making songs that are really fun to play live. Hopefully it’s a record you can listen to, and if you don’t want to think about what the songs are about you can just listen to it and enjoy it for the music. It’s anxiety-producing to always be in that headspace of, “What the fuck is going on?”

What a time to see Superchunk live! Lucky for you, they’re on the lineup for Riot Fest 2018, September 14-16 in Chicago’s Douglas Park. Tickets are on sale now.