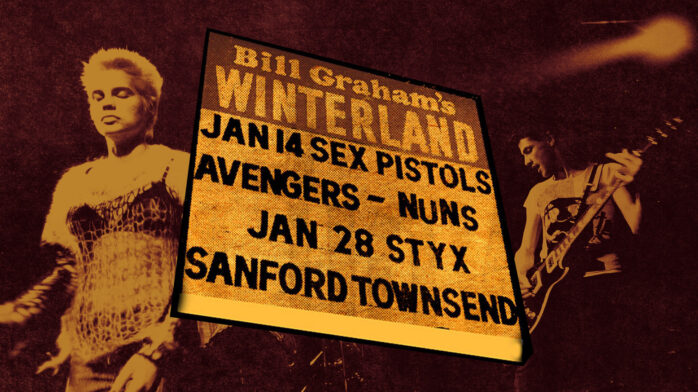 That One Time The Avengers Opened the Final Sex Pistols Show

Though they never went on to the relative fame and fortune of some of their class of ’77 peers, San Francisco punk originators the Avengers still handily managed to nab themselves legend status, having been one of the first bands of their kind to pop up in the then-hippie haven. Their sound was tight, furious, and anthemic; and was a prime early example of the mixture of UK sneer and classic California bubblegum energy that would come to define left coast punk rock forevermore.

Frontperson Penelope Houston was no small part of the Avengers’ appeal. 19 years young at the band’s inception, Houston was a furious performer; a high-burning torch lit by fires of righteous indignation, topped off with a bleached-blonde buzz cut. Houston’s since gone on to a highly varied and original solo career (which owes more to Fairport Convention and Sandy Denny than it does the Ramones), and has recently returned to the visual art world that brought her to San Francisco in the first place.

Nonetheless, she’s still excited about the band that first brought her to the rock ‘n’ roll stage. We recently got on the phone with Houston to talk about the early Avengers days, the biggest show they ever played, and what she’s up to now.

I WANT IN
The Early Daze

PENELOPE HOUSTON: I grew up in Seattle, in a very musical family. My mom had gotten her PhD in music at Stanford, and we were always playing instruments as kids, but I wasn’t always good. I was trying to play the violin, and it was pretty rough. I sang in chorus in school and stuff, but my main intention was to become a visual artist.

I was going to San Francisco Art Institute to study painting and printmaking at the beginning of 1977, and as soon as I got there, I met some of the people who formed the Avengers. The drummer had gone there, and he was looking to put a band together, and I just told him “I’m your singer!”

From the very beginning, the San Francisco punks were creating their own scene. Sure, there was inspiration from London and New York, but we were making it up as we went along, and that’s what made it so cool: if you look at the earliest bands—Crime, the Nuns, the Avengers, the Mutants—there was no template. You’d all just be going to the thrift store to find creepy stuff, invent your own look, and your own message.

WE ARE THE ONE
Opening for the Sex Pistols; Winterland, 1978

Before reuniting for the Filthy Lucre Tour in 1996 (with original bassist Glen Matlock in the spot that had been usurped from him by the more punk—read: less competent—Sid Vicious), the Sex Pistols’ concert at San Francisco’s Winterland Ballroom on January 14, 1978 had been their last. Along with fellow San Francisco punk originators the Nuns, the Avengers opened the show.

It was the biggest show we’d ever played, but it was also the biggest show the Sex Pistols had ever played. It was pretty much sold out; maybe 6,000 people were there. People came from all over the coast to see it, because the Pistols didn’t play L.A., Portland, or Seattle. There were a lot of people I knew there, but there were also a lot of people from outside that group, who just came to see this punk rock circus.

We played second; the Nuns had played before us, much to their chagrin! When they got out there, they were instantly spat upon. Things were being thrown from the audience, quite heavily. As soon as we walked out, I slipped on some gob on the stage. I didn’t quite hit the ground, but I almost did, and there was this little jolt of adrenaline.

Richard Meltzer (rock critic and Vom frontman) was introducing the bands, and he decided to be as obnoxious as possible and egg people on. (Winterland promoter/legend) Bill Graham didn’t like that, so he had his people drag him offstage and rough him up a bit. That’s the last thing I saw right before stepping on stage. This was not my favorite 3-400 people at the Mabuhay Gardens singing along… this was definitely a different situation!

I was looking out at this huge sea of faces. I would spot somebody I knew, and one second later they’d get sucked up in this vast crowd. There’s a video of the show (see below), and if you watch, you can hear that my voice is shaking at the beginning of the set. As we got into it, though, we got more and more confident, and by the end of it we were feeling pretty good.

It was a crazy night. I went out when the Pistols were onstage and tried to get as close to the front as possible, and I was just immediately soaked in other people’s’ sweat. You could lift both your feet off the ground and stay in the same place, it was so packed. I think I went backstage again pretty quickly!

There was a melee with a bunch of journalists and photographers afterwards, where all of the bands—plus Negative Trend (who’d been asked to play last, but Bill Graham wouldn’t allow it)—were all there trying to drink as much beer as possible, acting crazy. The photographers were all snapping photos, like “oooh, these are punks!” It was ridiculous, and we all knew it. Afterwards, we all went to this party in the Haight that was just jammed. There was nowhere to stand, nowhere to breathe. I think Sid was in a closet somewhere… I think that was a night he actually overdosed.

Later, the Avengers ended up doing some recording with [Sex Pistols guitarist] Steve Jones. The Sex Pistols’ tour manager, Rory Johnston, liked the Avengers, and he wanted to get us signed, so he got Steve to produce us after the Pistols had broken up and they’d finished their South American thing. We even wrote a song together.

I work for the San Francisco Public LIbrary now, and I’m starting a San Francisco punk archive there. In the last couple months, I’ve gotten some great little collections: one from a women named Debbie Dub, who worked with the Dils and Negative Trend, and had a zine called Starting Fires, and one from Cecilia Kuhn, who was in the band Frightwig. She passed away about a year ago, and her husband brought a bunch of her stuff for the collection. They were an important female band in the 1980s.

The anger that I felt as a 19-year-old—which is expressed in a lot of the Avengers songs, that kind of righteous indignation — is still so current. It’s easy to get behind these songs, to get onstage and sing them, especially right now. There are so many things to raise your fist over! Doing these shows is cathartic, it brings people together, and that’s something that’s needed right now.

I guess the 19 year old in me never really died out. It’s kind of remarkable, but when this band starts playing, any hesitation I might have had goes away. It’s like the songs exist in their own realm, and any time I join in, I’m part of that.