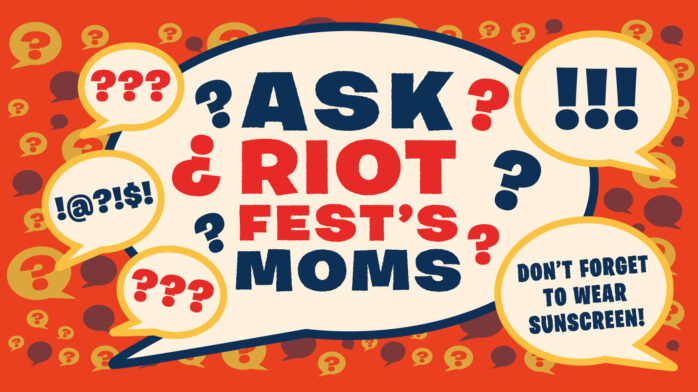 The Riot Fest Moms Share Their Wisdom (And Festival Picks)

This Sunday marks Mother’s Day, a holiday that you probably don’t think about enough ahead of time. Moms will always deserve far more than just a single holiday for everything they do—after all, who drove you and your dumb friends to all those concerts in the first place?

Not only is your mom the reason you exist, but she’s a source of infinite wisdom. To celebrate Mother’s Day, the Riot Fest staff asked each of their moms for a slice of said wisdom to share with all, along with their dream Riot Fest acts.

Dan’s Mom Says: “It’s nice to be important, but it’s more important to be nice.”

Riot Fest Pick: “If I can’t have Daniel Wade or Ryan Powers & the Secret Weapons appear at Riot Fest, I will go with Megan Trainor. I was going to say Aerosmith, but I thought I would go with someone more current.”

Monique’s Mom Says: “If you want to be respected, you need to respect others first. You need to be honest if you don’t want others to lie to you. Don’t forget where you came from, but don’t lose sight of where you’re going.”

Riot Fest Twitter Person’s Mom Says: “When you live near the edge of hell, beware of open manholes. But the biggest piece of advice is just be kind to others, because who are you to judge?”

Riot Fest Mom Pick: “Gladys Knight and the Pips or The Temptations.”

Bailey’s Mom Says: “Make good choices. Every day I dropped Bailey off at high school, I would say that as he got out of the car!” [Editor’s Note: This is 100% true. Thanks for the rides!]

Riot Fest Mom Pick: “Moon Taxi. They are the last live music I heard that I really enjoyed.”

Buck’s Mom Says: “Make sure to buy the Riot Fest early bird tickets, because Riot Fest always delivers an amazing lineup. Always. Also, learning to negotiate, set, and keep boundaries with people is healthy and will serve you well your whole life.”

Jake’s Mom Says: “I’ve listened to this song a hundred times. but this line really hit home when I heard it the other day and decided I was going to live by it. So my advice is: ‘It’s better to burn out than it is to rust.’ – Neil Young”

You can get your Mom Rock on with a Riot Fest curated Mother’s Day playlist over here. Happy Mother’s Day to all—don’t forget to give your mom a call! (Or maybe even take her to this year’s Riot Fest…)