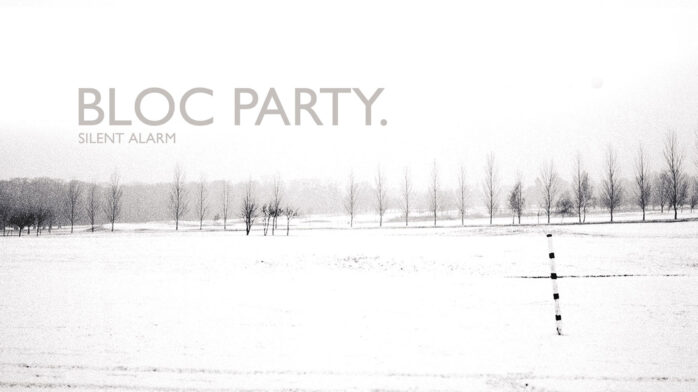 Control, Chaos, and the Fury of Bloc Party’s ‘Silent Alarm’

I was talking recently to a longtime New Yorker who was around in the late 70s when CBGB and Studio 54 were in full swing, both giving birth to revolutions that would each in its own way turn American music on its head. The way we look back at that time, we tend to separate the punks from the disco scene, each supposedly representing a set of cultural values in direct opposition to each other. But that wasn’t the case—or at least not all the time, according to my friend.

She liked to start out her weekend nights at CBGB for a show and afterwards head uptown to dance to big, glittery disco songs at the Studio until morning. Lots of people did that, she said; a lot of the punk bands of the time reflected that back and forth, with choppy guitars and aggro lyrics mingling with funky basslines and four-on-the-floor drum beats that work just as well for shaking your ass as pumping your fist.

By the late 90s, two decades after Blondie recorded “Heart of Glass,” punks had forgotten how to dance. The pop-punkers and hardcore kids considered anything more coordinated than a circle pit to be frou-frou nonsense. Post-hardcore and emo was a lot of people standing around motionless on a stage playing to people standing around motionless in front of it. The only people who really knew how to dance were the ska fans, and most of us can only take so much ska music in one lifetime. For my friends and I, being punk and liking to dance meant inventing our own modern day take of the CBGB-to-Studio-54 routine, splitting our time between DIY spaces and raves or gay clubs that mostly played poppy house music—the kind that our friends who were only into powerviolence or math rock detested.

Not long after the turn of the millennium, things started to change. Bands started to rediscover that fertile area where dance music and deconstructed rock overlapped in the 70s, and beat-driven singles started to materialize out of scenes from San Diego to Brooklyn and beyond, haphazardly coalescing into something people started calling “dance punk.” Soon there were enough of these records for DJs to start popping up at shows and dive bars to play them, and the distance between the DIY scene and the dance floor collapsed. Suddenly, there were clubs full of punks dancing—and every time you went out to one you could count on hearing at least two or three cuts from Bloc Party’s Silent Alarm.

2005 was a weird time to be going out clubbing. The news was full of war and terrorism, and living in a city meant learning to live in a heavy cloud of ambient anxiety. Dance punk offered relief from that pressure, but it was also saturated with references to it: house beats sped up to manic tempos, guitar lines reduced to jags of discordant noise, and lyrics about alienation and psychic tension.

If the earliest recordings from the dance punk revival sketched the moment in sound, Silent Alarm captured it in the high-def night vision that had, by then, become a TV news staple—slashes of paranoid monochrome color seared across a jet black backdrop. Too-fast tempos like racing heartbeats, guitar lines that ricocheted across anxious scales, abrupt stops and starts that caught you off guard even after you heard them dozens of times. It was an album that kept you off balance and on your toes. Somehow, that felt exactly right.

And then there were Kele Okereke’s lyrics that sliced through the mood of the moment from cryptic angles. The era was all about codes: codes being used to encrypt lies in harmless language, codes being broken to scoop up data at home and abroad, language stripped of context and given obscure new meanings. It didn’t matter that his words didn’t always make sense on first listen. We had gotten used to words that didn’t mean anything. And unlike the obfuscators in charge of our country and our then-new wars, Okereke would occasionally hit us with a moment of stark truth: “He’s born a liar, he’ll die a liar.” “We’ve got crosses on our eyes.” “You know I’m on fire so stomp me out.”

Silent Alarm is a great record to listen to with headphones, where you can pick apart the give and take between control and chaos that fuels it. But even though it’s a record steeped in the uneasy wavelengths of its time, it’s not a record for sitting and brooding. To really hear it right, you have to be dancing; the frenetic energy of the dance floor, the sweat and surging blood, and even the occasional stray elbow to the ribs is a necessary part of the album. Without it, it’s not complete. With it, it’s transcendent—when the buzzing tension you feel in your head vibrating in sync with the band and you find the moment of ecstatic transcendence that everyone on the dance floor is looking for. “Are you hoping for a miracle?” Okereke asks. Sometimes when you’re moving right, you can actually feel like you’ve found one.