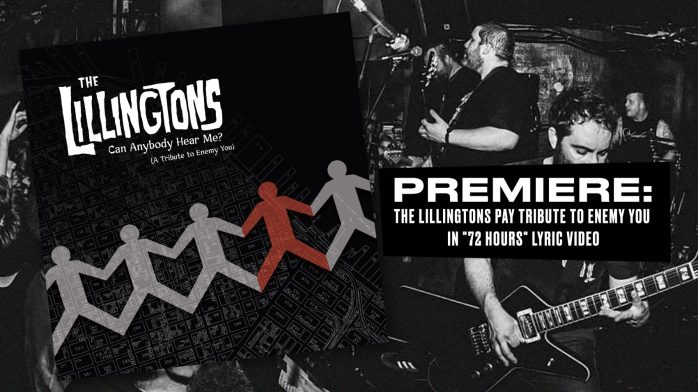 Premiere: The Lillingtons Pay Tribute to Enemy You in “72 Hours” Lyric Video

The Lillingtons—a band familiar to anyone who witnessed their mighty live reformation at Riot Fest 2013—has been more active than ever lately. The group’s last album, Stella Sapiente, dropped in 2017 after an 11-year gap in releases. Now, they’ve released a new EP, Can Anybody Hear Me?, in tribute to Enemy You, a band near and dear to The Lillingtons. To celebrate, we’ve got a brand new video for “72 Hours” off the EP you can watch today.

“This is one of my favorite Enemy You songs, Kody Templeman of The Lillingtons shares. “It’s melodic and upbeat, in the classic EY style.” The song holds equal value to Enemy You bassist Chris Matulich, who made several guest appearances on the EP, as well as contributing the layout. “This was one of the most fun songs to play live,” Matulich reflects. “I’m glad The Lillingtons decided to do this one.”

As the album description notes, The Lillingtons and Enemy You are “the gold standard” in melodic punk. The two groups bonded after the two respective singers began to write to each other as pen pals, later becoming labelmates. David Jones, Enemy You’s singer, unfortunately passed away in 2015—as to why The Lillingtons have paid their utmost respects with six Enemy You covers for their latest release.

Can Anybody Hear Me? is available now on all streaming services, Bandcamp, and on vinyl and CD via Red Scare Industries. A portion of proceeds from the EP’s sale will be donated towards to National Suicide Prevention Lifeline.