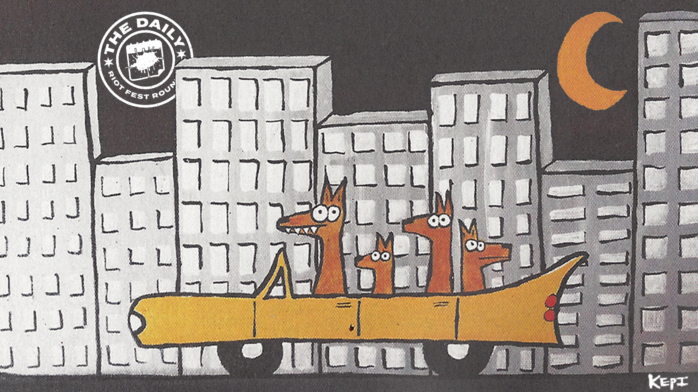 NPR just premiered a new video for Converge today. Check out “I Can Tell You About Pain,” from a 2-song 7″ released digitally via Epitaph and physically via Deathwish Inc.

Have you seen Weezer‘s new video for “Feels Like Summer?” It’s a spot-on-but-Weezery homage to Guns ‘n Roses classic “Paradise City” clip. It’s pretty awesome, but not as awesome as the band’s first two albums.

Holy shit, motor away in the direction of Magnet, because they’re streaming How Do You Spell Heaven, the new album from Guided By Voices. Or stay here…

Speaking of streaming new albums, Noisey has Dead Cross‘ new self-titled album, coming out this Friday, as well as an interview with the band.

Manchester Orchestra released a new video today for “The Sunshine,” a track from A Black Mile to the Surface, the new album that surfaced last Friday. And don’t forget, we’ve got these guys at Concord Music Hall on September 24th. More info on that can be found here.

There is a new Primus album in our sights! And not just any new Primus album, but it’s the band’s first with the original lineup of Les Claypool, Larry LaLonde and Tim “Herb” Alexander since 1995’s Tales From the Punchbowl. Grab yerself a can of pork soda and fire ‘er up, man, because this outta be good! The Desaturating Seven comes out September 29th, and you can hear a song as early as right now. Here’s “The Seven”:

Hmm, Foo Fighters, what’s with the bit from the Metro logo that you just tweeted? Could…it…be???

Looking for a tropical getaway? Follow Real Friends to Hawaii.

As always, Andrew W.K. is a beacon of light in the Twitter swamp.

PARTY TIP: Life can be intense, confusing, and painful. But that still doesn't mean it isn't worth celebrating.

"but never have i been a blue calm sea" #np pic.twitter.com/rBvjy6se6y

Brendan Kelly asks the probing questions. Even though we all know the truth here.

Can you imagine the size of this guy's penis!? pic.twitter.com/zZdRLargJ9

A Day to Remember is out on their headline tour now.