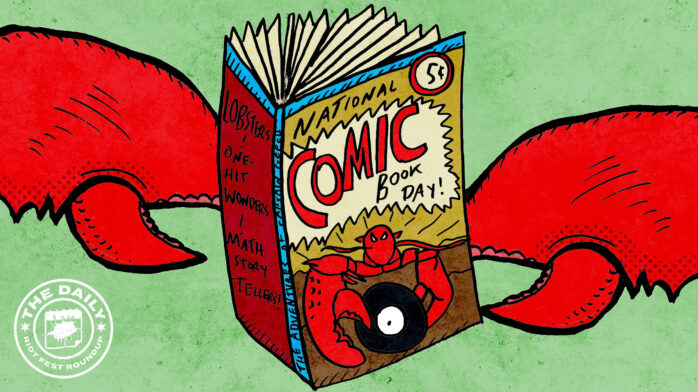 Since The Original Misfits‘ show at the Fabulous Los Angeles Forum sold out quicker than you can say “goddamn son of a bitch,” they’ve added another. Danzig, Jerry and Doyle will terrorize the MGM Grand Garden Arena in Las Vegas on December 28th, with Alkaline Trio and FEAR opening.

Put it All on Black: The Original Misfits are Headed to Vegas with Alkaline Trio

Michael Cera has a new song out—a duet with Sharon Van Etten—and we interviewed him about it.

Brooklyn Vegan has a cool photo gallery from The Replacements‘ February 4, 1986 show at Maxwell’s in Hoboken, NJ, which is the exact show that Rhino is releasing on October 6th as a live album called For Sale: Live at Maxwell’s 1986. Check out the photos, as well as this new trailer for the album.

Wu-Tang Clan just released a new diss track about the worst dude ever, Martin Shkreli, and all is awesome in the world. Martin Shkreli is most definitely someone ta f wit.

If that’s not enough good news for you, here’s All Time Low playing with puppies.

Knuckle Puck just released a music video for their song “Double Helix,” from Shapeshifter, the band’s new album that comes out on October 13th via Rise Records.

And a couple bits from around the internet…

The National covered New Order the other day! Check out this video of “Love Vigilantes” from the band’s tour kickoff at the O2 Apollo in Manchester, UK.

Here’s Billie Joe Armstrong playing “Ordinary World” on Colbert the other night. While many know the song as the closing track of Green Day‘s last album Revolution Radio, it was actually written for the film Ordinary World, starring…Billie Joe Armstrong as a…punk rock singer! It’s a really good movie that you should check out if you haven’t already.

Very sad to hear about the passing of “Screaming Eagle” Charles Bradley.

It is with a heavy heart that we announce the passing of Charles Bradley. Thank you for your thoughts and prayers during this difficult time pic.twitter.com/FFqQ1K1pX5

A Day To Remember tweeted out a new video today, for “We Got This.”

Check out our new music video for We Got This, it took a really long time to make. https://t.co/6XyJrWU7Eo

Pizza. Backstage. With @AndrewWK. What’re you waiting for?!

you never hear about anyone jacking on.

hey everyone we are playing @TheCrepePlace in santa cruz on oct 25th. come eat some crepes w us! get tickets here – https://t.co/D6T8Z53fUv pic.twitter.com/dCK2lUYJbA