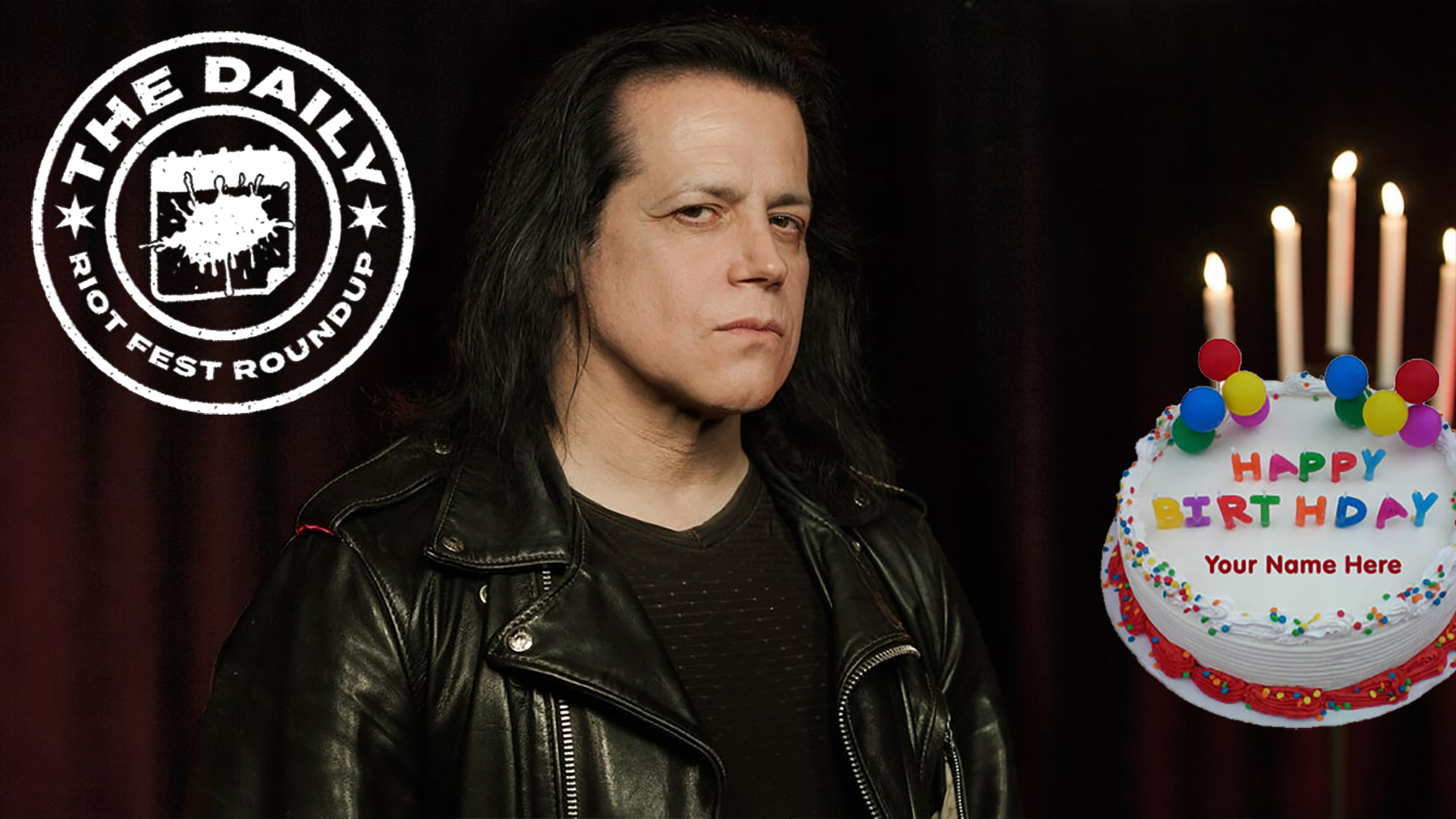 Today is Glenn Danzig‘s birthday! Since he is immortal, gaining one more year probably doesn’t mean as much to Mr. Danzig as it does to us. That being said, Glenn, all of us at Riot Fest would like to wish you a happy birthday, and we can’t wait to see you here in Chicago in a few months!

Wondering what The Riot Feast is going to look and feel like on the inside? So were we, until we checked Chicagoist today, for they revealed the artist’s rendering of the interior for the first time! For those just tuning in, The Riot Feast is a carnival-themed pop-up restaurant we’re opening in Chicago’s Wicker Park neighborhood with the brains behind the famed Saved By The Bell-themed diner, Saved By The Max. Stunning as the spot may look now, it will truly need to be experienced to be appreciated. So from July 8th through September, you can find out for yourself—but only if you buy your tickets at TheRiotFeast.com before they sell out.

In a surprising development that shocked the Riot Fest office today, Wu-Tang Clan have just released a new track! “Don’t Stop” is featured on HBO’s brilliant series Silicon Valley’s Season Four soundtrack, which hits stores today in advance of Sunday’s big season finale. We gotta admit, though, that it’s pretty difficult to concern ourselves with predicting how Richard and the Pied Piper gang will screw everything up this time when Raekwon, Method Man and Inspectah Deck are spitting over a brand new, yet classic-sounding RZA beat, amirite?

Last night, Queens of the Stone Age performed live for the first time in nearly two years near Niagara Falls, NY, however overshadowing this news is the debut of another new song. “The Evil Has Landed” is the second track revealed from QOTSA’s forthcoming album Villains, since officially releasing lead single “The Way You Used To Do” last week. The big difference between these two tunes is that the band actually oversaw the rollout of the first single, whereas “The Evil Has Landed” is only available to hear via a shitty bootleg recording that was uploaded to some dude’s YouTube. Since we’ll take anything we can get from this band (not to mention, the bootleg still sounds better than most other bands’ real albums), let’s just look past the fidelity issues and enjoy, shall we?

Nothing More just dropped a lyric video for their new single, “Go to War.” The tune is from the band’s forthcoming new album The Stories We Tell Ourselves, which is due out in September, just in time for the heaps and heaps of tour dates they just announced as well. The Stories We Tell Ourselves Tour kicks off in Memphis on September 12th and goes through November 11th in New Orleans, with the band stopping in Chicago’s Douglas Park on September 15th for Riot Fest. Setting the stage at all of these dates (except Riot Fest) will be As Lions, My Ticket Home, and Hell or Highwater. The full tour schedule is listed on the band’s website.

In a new series called Pitchfork Live over at, well, Pitchfork, you can watch The National‘s entire show at an intimate Paris club last night. As a bonus, the band debuted four songs from Sleep Well Beast, their new album that doesn’t hit stores until September 8th. If you just wanna click around to the new stuff, check out “Nobody Else Will Be There” at the 4:50 mark, “The System Only Dreams in Total Darkness” at 20:50, “Guilty Party” at 25:22, “Carin at the Liquor Store” at 37:22, and then zip on over to 50:06 for the title track, “Sleep Well Beast.”

Tommy Stinson is teaming up with Omnivore Recordings to release a massively expanded reissue of Bash & Pop‘s unsung hero of a debut album, Friday Night Is Killing Me. Stinson formed the Faces-tinged riff-driven rock band not long after The Replacements‘ unceremonious split in the summer of 1991, and Sire originally released Friday Night Is Killing Me in January of 1993 without a fraction of the fanfare it deserved. Bash & Pop broke up the following year, and the album’s cult status has slowly grown ever since.

Hot on the heels of Bash & Pop’s triumphant return to making killer rock records (Fat Possum released the acclaimed Anything Could Happen five months ago) and playing sweaty rock shows (they’re plaing with Green Day in London’s Hyde Park on July 1st,  and supporting Psychedelic Furs this fall), Omnivore is breathing new life into this fan favorite. The two-CD reissue package includes a completely remastered version of Friday Night Is Killing Me on disc one, while disc two features 15 tracks of previously unreleased odds and sods—including demos, alternate versions and studio outtakes—as well as “Making Me Sick” from the Clerks soundtrack and a couple of B-sides. The package will also feature liner notes from Replacements biographer Bob Mehr, and the whole shebang has been meticulously produced by former Replacements manager and Twin/Tone Records impresario Peter Jesperson and Cheryl Pawelski from Omnivore.

The full track listing and more info are posted over at Omnivore’s website, where you can pre-order the Friday Night Is Killing Me reissue. Last, but not least, check out this early demo of the rollicking album opener, “Never Aim to Please,” which was posted earlier today over at Brooklyn Vegan.

Prophets of Rage played to a shitload of people in Cophenhagen:

The new Minus the Bear video is a trip:

Jared from Dirty Heads made a cool playlist:

Check out @jared_watson‘s Go To’s and New News playlist on @Spotify and make sure you’re following us! https://t.co/QKTFdbLk1p pic.twitter.com/0UvvSEOL8J

Sleep On It have been writing some “inspired” haikus:

A haiku, for your Thursday.

Somebody told me
“The world is gonna roll me”,
Once upon a time.

We are writing and tracking our new record this summer.